Data from NASA’s Lunar Reconnaissance Orbiter indicate the number of crater-forming impact events on the Moon doubled or tripled during the last 290 million years or so. A similar increase is seen in the number of Earth impacts, both possibly the result of an asteroid collision more than 300 million years ago that showered the inner solar system with rocky debris.

Despite the crater-erasing effects of erosion on Earth, scientists have long wondered why relatively few craters remain in older terrains given Earth and Moon presumably experienced the same levels of bombardment over the history of the solar system. The new study provides a possible answer: the number of major impacts older than a billion years, both on Earth and the Moon, was much lower than previously thought.

“What this research uncovered is that the Earth has fewer older craters on stable terrains not because of erosion, but because the impact rate was lower prior to 290 million years ago,” said William Bottke, an asteroid expert at the Southwest Research Institute who coauthored a paper outlining the research in the journal Science.

“The Moon is like a time capsule, helping us understand the Earth. We found that the Moon shared a similar bombardment history, which meant the answer to Earth’s impact rate was staring everyone right in the face.” 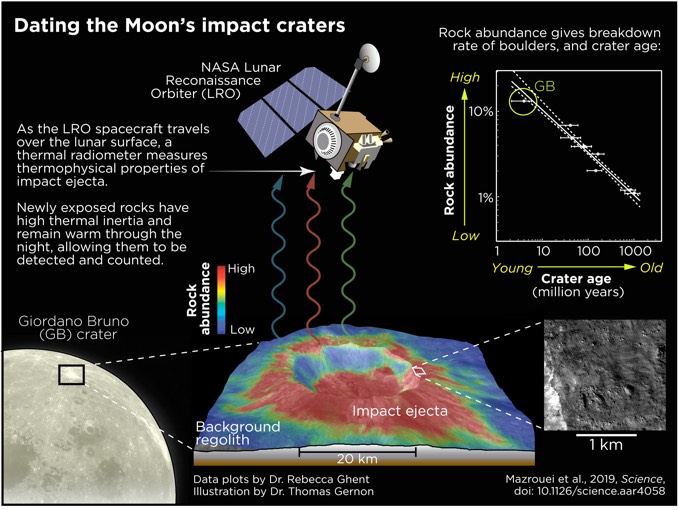 Large impact craters on the Moon that formed in the last billion years excavate large rocks and boulders that heat up during the lunar day and slowly cool during the long lunar night. Older craters, eroded by micrometeoroid impacts over geologic time, are smoother, made up of finer-grained materials that cool more rapidly.

Using the Lunar Reconnaissance Orbiter’s thermal radiometer, known as Diviner, researchers were able to take the temperatures of 111 craters across the Moon’s surface that are more than 10 kilometres (six miles) across and less than a billion years old. The results matched the known ages of craters from data collected during the Apollo program.

Using a new technique for determining how long it takes to reduce rocks to fine-grained soil, lead author Sara Mazrouel and co-author Rebecca Ghent of the University of Toronto found fewer older craters than expected.

Other researchers are not so sure. H. Jay Melosh, a professor at Purdue University and an expert on impact events, told The New York Times the Science paper poses “an intriguing idea,” but “with statistics of small numbers, that doesn’t give me confidence that they’re right. You can’t say it’s wrong, either. It’s just not convincing.”

Phenomenally durable crystals called zircons are used to date some of the earliest and most dramatic cataclysms of the solar system, such as the late heavy bombardment that created hellish surface conditions on the young Earth and Moon about 4 billion years ago. Now a study of zircons from a gigantic meteorite impact in South Africa casts doubt on the methods used to date lunar impacts.

Lunar impact: how the Moon’s Mare Orientale was formed

The Moon’s Orientale basin is an archetype of “multi-ring” basins found throughout the solar system. New research has enabled scientists to reconstruct Orientale’s formation using data from NASA’s GRAIL mission. It is now thought that the 580-mile-wide feature was created 3.8 billion years ago by an impacting object some 40 miles across travelling at about 9 miles per second.

On 17th March 2013, an object hit the Moon’s surface in Mare Imbrium and exploded in a flash of light nearly 10 times as bright as anything ever recorded before. NASA’s Lunar Reconnaissance Orbiter has found the new 19-metre-wide crater plus more than two-dozen others.