The Beginning and The End of Everything: From the Big Bang to the End of the Universe 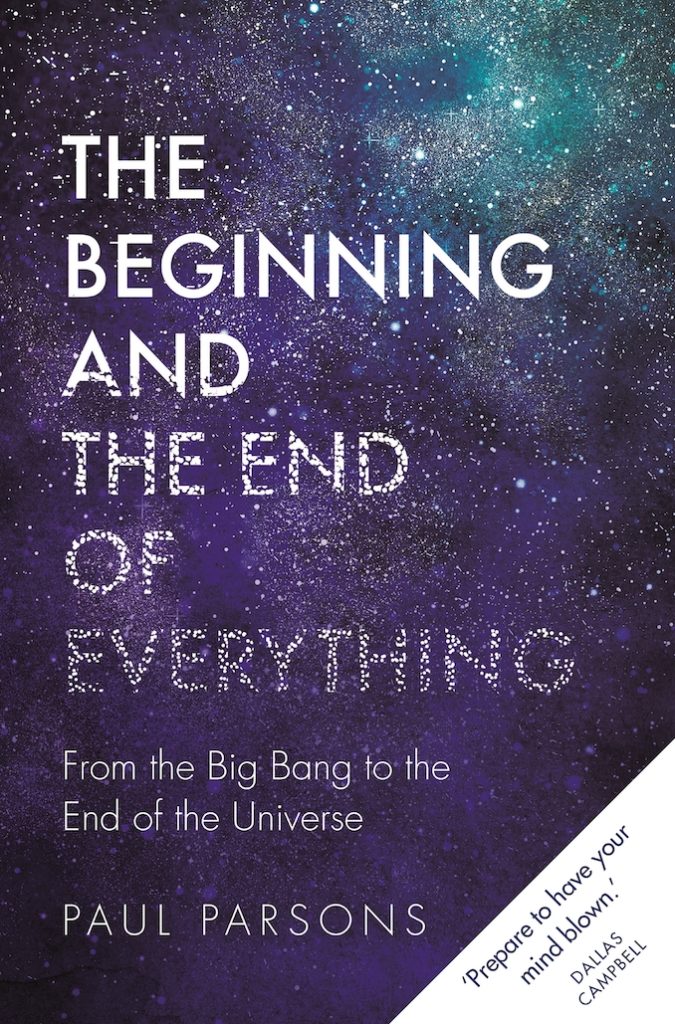 This book, by former Astronomy Now editor Paul Parsons, begins with an observation by Belgian cosmologist Georges Lemaître that “the Big Bang was a day without a yesterday”. Grappling with that mind-blowing concept perfectly sets up the reader for what follows.

The shocking news in the 1990s that space is not only expanding, but is doing so ever more quickly, changed forever a few dog-eared theories about how our Universe was born and how, if at all, it would die. As the concept of an accelerating expansion itself becomes accepted, there has never been a better time to get to grips with this brave new world of cosmology.

This is not just a history of the Universe. The book is driven by the fascinating narrative of humanity’s developing cosmologies, from the religious philosophies of Mesopotamia to the latest scientific discoveries. By degrees we move from Thales, Copernicus and Newton to Einstein, Hubble, Hawking and beyond.

Time is spent examining how the Steady State theory fought for supremacy with the theory of the Big Bang and the expanding Universe. Evidence eventually favoured the latter, but even that camp did not suspect  that this expansion is accelerating.

There can be no better example that science does not stand still. I am therefore pleased to see that the author occasionally pauses to explain the ‘scientific method’ and why it is such a powerful and progressive tool compared to the alternative of mere philosophical musing. Indeed, Parsons delights in pointing out that a scientist when presented with damning evidence is duty bound to discard a favoured theory – even if it is their own!

Parsons concludes the book in firmly scientific style. In the face of observations that deliver a startling result, what we need are more observations. He leaves us therefore eagerly anticipating further exploration of the very large, via gravitational wave detectors and the James Webb Space Telescope, and future revelations of those first few moments after the Big Bang through the subatomic physics of particle accelerators such as the Large Hadron Collider.

This enjoyable book delivers a solid background in cosmology and current thinking and is heartily recommended.

The Cosmic Mystery Tour: A High-Speed Journey Through Space and Time 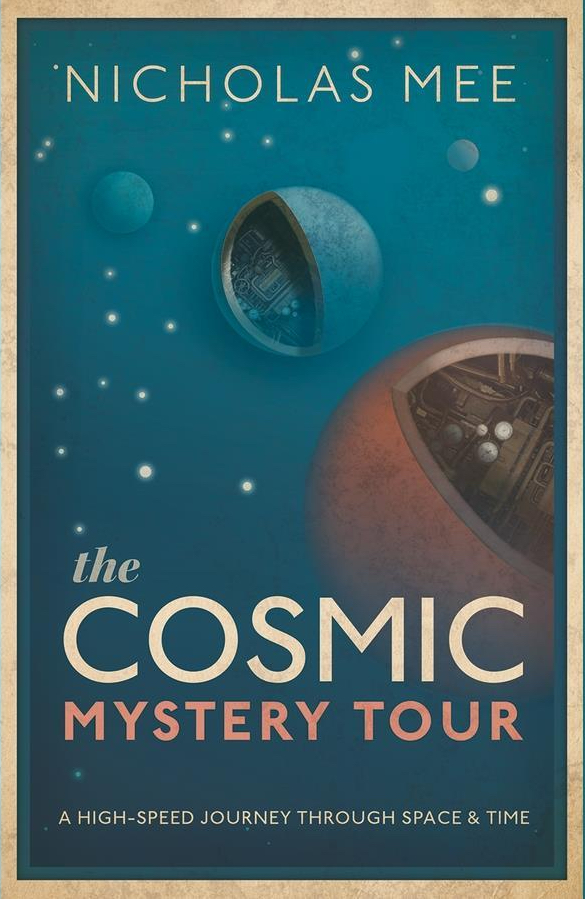 This is a high-quality, small-format hardback of just over 200 pages and more than 100, mostly colour, illustrations and diagrams that assist in the delivery of the book’s contents.

The Cosmic Mystery Tour moves at almost relativistic speed though the past 300 years of accumulated understanding of the physical world and Universe that we inhabit. The author, Nicholas Mee, acts as the reader’s chaperone as we are whisked along, starting with Isaac Newton hunting counterfeiters for the Royal Mint a decade after his breakthrough in gravity, before accelerating to 1915 and Einstein’s seminal work on General Relativity, and then travelling back to Michael Faraday and James Clerk Maxwell’s work on electromagnetism, all in just the first 20 pages! There is a non-linear structure to the stories and topics covered in the book, which perhaps contributes to the element of mystery in the title, and it all still comes together in a coherent narrative.

Part one describes the quest for ‘The Laws of the Cosmos’, while part two focuses on the history and structure of the cosmos, covering the Big Bang and stellar evolution, as well as gravitational waves and, at the time of publication, the expected first image of a supermassive black hole, and includes stories and anecdotes of the often colourful characters who contributed to our current understanding, such as Georges Lemaître, Fritz Zwicky and Fred Hoyle.

The final section deals with astrobiology and the search for extraterrestrial life in the Universe – something that can easily spill over into the realm of science fiction, but which has certainly puzzled some great minds, as exemplified by the Fermi Paradox.

The Cosmic Mystery Tour is aimed at beginners looking for an easy-to-read introduction to the modern view of the Universe. It’s an engaging read and provides a good springboard to further investigation of any topic that captures the reader’s imagination. There is, in fact, a short bibliography, which can assist with this desire. For those of us with a more rigorous academic background in physics, it is still an entertaining diversion for a couple of hours.

Your Place in the Universe: Understanding Our Big, Messy Universe 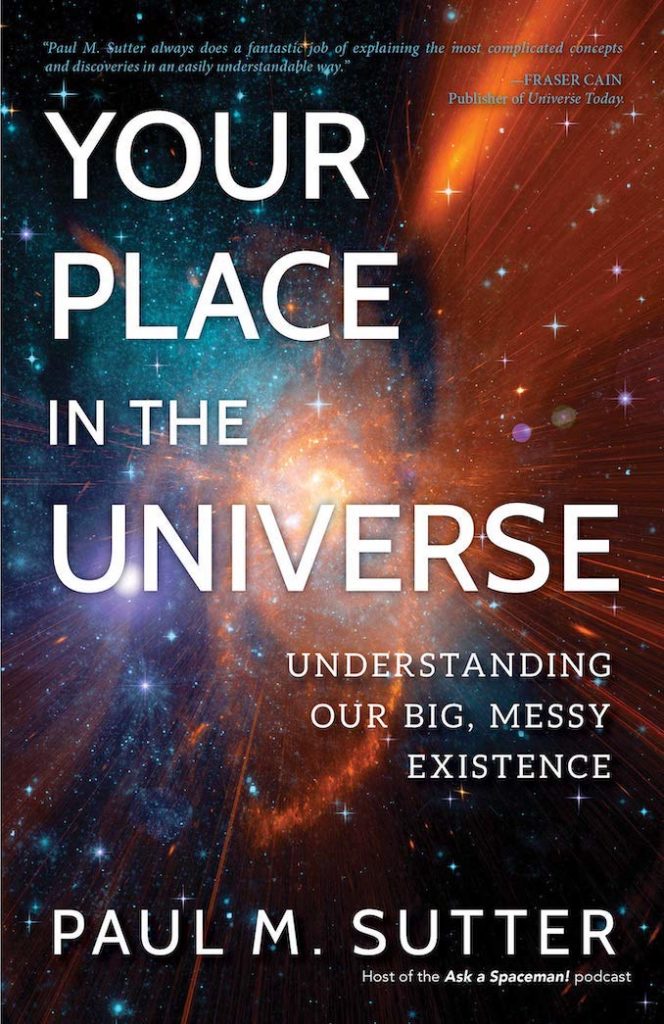 The ability to make convoluted scientific developments and complex cosmology seem not only accessible and comprehensible, but also effortlessly entertaining, is a precious one. Paul Sutter’s disarming, breezy style draws you in and allows you to relax. Suddenly questions like ‘What is our place in the Universe?’, ‘How did we all get here?’ and ‘Is our home nothing more than a tiny speck of blue in an ocean of night?’ seem less terrifying.

Finding meaning in our lives in this topsy-turvy world could not be more in vogue at the moment, but with light-hearted metaphors, a large dollop of fun and some gentle hand-holding, Sutter guides us through some of the enigmatic mysteries of the Universe. When did a scientific book last make you laugh out loud? Well, this one will. Under Sutter’s slightly irreverent treatment, iconic historical figures suddenly become personalities – characters who we can relate to, laugh at (just a little) and perhaps most importantly, marvel with. From Johannes Kepler’s ever-expanding bladder to Edmond Halley the history geek, as well as William Herschel the planet-discovering rock star, Sutter’s writing adds context and colour. From pin-pointing the Earth’s place in an infinite Universe to black holes and dark energy, Sutter is our cheerful fact-filled guide.

This is by no means a frivolous book, but importantly, you don’t need a degree or to be an astronomy nerd to enjoy it or to wonder at the audacity of life. This is a book for anyone who has ever stared at the night sky and wondered what the grand design was (Sutter says there wasn’t one). As Sutter  himself says, Your Place in the Universe is a book not just about physics and science, but also about our home, the Universe, and our human story. It is about how our knowledge and understanding has grown and developed, and how we have decoded and deciphered, faltered and often misunderstood. We may have occasionally got a little lost and gone down the odd blind alley, but Sutter sums up how, ultimately, we still continue to untangle our delightfully chaotic existence in the Universe.

A Fortunate Universe: Life in a Finely Tuned Cosmos 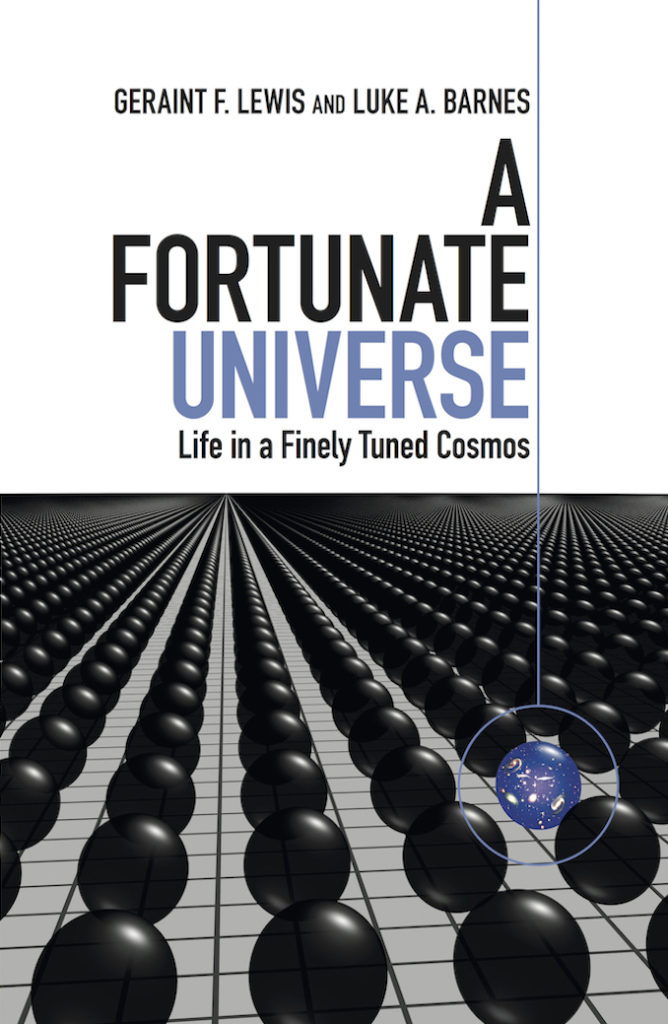 The Universe seems curiously fine-tuned to allow for the emergence of stars, planets and life. Were the gravitational constant, or the strength of the weak and strong forces, or any other of the myriad properties that have gone into defining our Universe, even just slightly different, then our Universe would likely be empty, sterile and possibly very short-lived. So, why is the Universe the way it is?

It is a weighty subject, incorporating everything from cosmology and atomic physics to quantum physics and philosophy, but astrophysicists Geraint Lewis and Luke Barnes have done a stellar job in explaining some extremely challenging concepts with style and panache. Cambridge University Press are mostly known for their academic titles, but this is firmly in the popular science mould, akin to the works of authors like Brian Greene or Sean Carroll.

Occasionally it does struggle a little under the weight of the concepts being discussed. For example, I found the section where the authors imagine what would happen if time, and therefore light, travelled backwards towards the big bang, to be rather heavy reading. However, these are difficult topics to explain and although I found myself having to reread pages, this is not necessarily a bad thing.

Overall, the tone of the book is engaging, though occasional attempts at being witty fall flat, while the authors sometimes become distracted by tangents resulting in their belabouring their point. This can become frustrating, particularly as you know where it’s headed: the multiverse.

The concept of the multiverse is tackled in the final ‘conversation-style’ chapter (the two authors talking to one another), along with other potential solutions to the fine-tuning problem, including the simulation hypothesis and God. That each of these solutions can be seen as far-fetched, depending on your viewpoint, is eye-opening, but ironically (given that I’ve always had a soft spot for the multiverse hypothesis) the book has succeeded in giving me a greater appreciation for the idea that there are simply deeper, as yet undiscovered equations that explain the fundamental constants without having to invoke parallel universes or the hand of God.

So, despite a few small caveats, I strongly recommend A Fortunate Universe.

Super-cooled quantum detectors have demonstrated the sensitivity needed to detect telltale microwave photons from dark matter axions, if they exist, kicking off the latest high-tech hunt for the elusive particles.

The universe is expanding at an accelerating rate — or is it?

Five years ago, the Nobel Prize in Physics was awarded to three astronomers for their discovery, in the late 1990s, that the universe is expanding at an accelerating pace. Now, a team of scientists led by Professor Subir Sarkar of Oxford University’s Department of Physics has cast doubt on this standard cosmological concept.

ALMA detects most distant signs of oxygen in the universe

An international team of astronomers has used the Atacama Large Millimetre/submillimetre Array (ALMA) to detect glowing oxygen in a distant galaxy seen just 700 million years after the Big Bang. This is the most distant galaxy in which oxygen has ever been unambiguously detected, and it is most likely being ionised by powerful radiation from young giant stars.