Latest News
The total lunar eclipse of Friday, 27 July 2018 is the second and last to occur this year (the total lunar eclipse of 31 January was described here). A lunar eclipse occurs when the full Moon passes through the shadow of the Earth and a maximum of three such events can occur in a single year. The eclipse is deemed total if the Moon is fully immersed in the Earth’s central (or umbral) shadow and at such times we can say that we’re experiencing totality. What’s unusual about the 27 July eclipse is that occurs on the same day that the Moon is farthest from Earth in its orbit, known as apogee. At such times the Moon appears smaller than average and its orbital motion with respect to the stars is slower.

An apogee Moon that almost passes through the centre of the Earth’s shadow ensures that the duration of totality on 27 July is longer than usual – so great, in fact, that at 104 minutes it’s the longest total lunar eclipse of the entire 21st century*.

Can I see the eclipse from where I live?
Unlike a total solar eclipse that is only visible from a narrow swathe of land or sea where the tip of the Moon’s shadow brushes the surface of the Earth, a total lunar eclipse is visible from an entire hemisphere of our planet where the full Moon happens to be above the horizon. However, not all locations within the lunar-facing hemisphere of Earth will see the entire event as the Moon may set while it is in progress, or twilight may interfere near dusk or dawn.

Weather permitting, this eclipse can be seen from Antarctica, Australasia, Russia (except northernmost parts), Asia, Africa, Scandanavia, Europe (though the Moon rises at mid-eclipse seen from the centre of the UK, see below) and Central/Eastern South America. 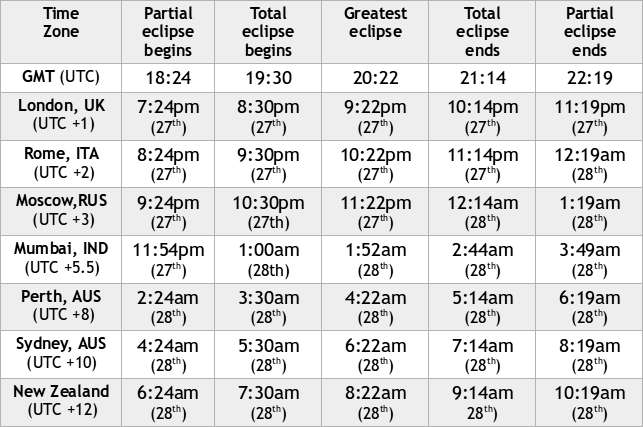 From the table above, take note of the Universal Time (UTC) on 27 July at which the various eclipse stages occur. Armed with this information you can consult our interactive online Almanac, select your nearest city anywhere in the world, type in the Universal Time and see if the Moon is visible or not. (Almanac tip: ensure that daylight savings time is selected/deselected, as appropriate for your location.)

Viewing prospects from the British Isles
Observers in the UK will miss the first half of the eclipse since the Moon doesn’t rise in the southeast until shortly after 9pm as seen from the heart of the British Isles. (Note from the table above that greatest eclipse occurs at 9:22pm BST.)

Furthermore, an observer in the centre of the UK has to wait until just after 9:15pm for sunset, so the sky will be in bright twilight for at least a further 45 minutes. By 10:30pm BST, the Moon will be emerging from the Earth’s umbral shadow, but this is the time to start looking about 6 degrees (roughly half the span of a fist held at arm’s length) below the lunar orb to find magnitude -2.7 Mars, the Red Planet also reaching opposition on this day.

View the eclipse online
If you happen to be on the opposite side of the Earth to where the action’s taking place, or you’re clouded out, you can still view the event online. The Virtual Telescope Project is planning a special live broadcast from the Roman Forum on Palatine Hill in Rome overlooking the Colosseum and the Arch of Constantine. Click here to follow to view the live stream starting at 18:30 UTC (7:30pm BST) on 27 July.

The Moon, Jupiter and star Spica line up at dawn on 19 January

Before sunrise on Thursday 19 January, observers in Western Europe can see an interesting celestial conjunction in the southern sky. At about 6am local time, the waning gibbous Moon, largest planet Jupiter and Spica — the brightest star in the constellation of Virgo — all lie in a line encompassed by the field of view of a typical 7x or 8x binocular.

Planets Mars and Uranus meet in the evening sky

Exactly a week after its close encounter with dazzling Venus, outer planet Uranus lies close to Mars on the evening of Wednesday, March 11th — but you’ll need to time your observation carefully in the dusk twilight twilight to ensure success.