This month’s partial eclipse of the Sun is visible across the length and breadth of the UK on the morning of 25th October 2022. Solar eclipses visible from the UK are pretty infrequent, so this event presents a fine opportunity to watch as the Moon gradually encroach upon the Sun.

The partial eclipse begins soon after 10am BST, when the Moon contacts the Sun’s northern limb. Observers in Scotland are marginally first in line, at 10.03am BST, and they’ll see 30.6% of the Sun’s diameter hidden, the largest (see the table below).

At NO POINT in this eclipse should you look at the Sun directly, as you can during totality of a total eclipse of the Sun when the whole of the Sun is covered by the Moon. The best way to view is by ‘projection’, when a pair of binoculars or a small telescope can be used to project the solar disc onto white card; you must cap the instrument’s main optics, as well as any finder while you’re lining up the Sun (see the image).

The eclipse is visible across almost all of Europe, where more easterly cities, such as Berlin and Warsaw will experience a larger partial eclipse (magnitude 43.6% and 52.1%, respectively). Chelyabinsk, in Russia’s Ural Federal District, has the accolade of the largest eclipse for a major city; at 2.02pm local time, 83.4% of the solar disc will be hidden by the Moon (the maximum eclipse occurs at 11.01 UT, with a magnitude of 86.19%, or 0.8619). 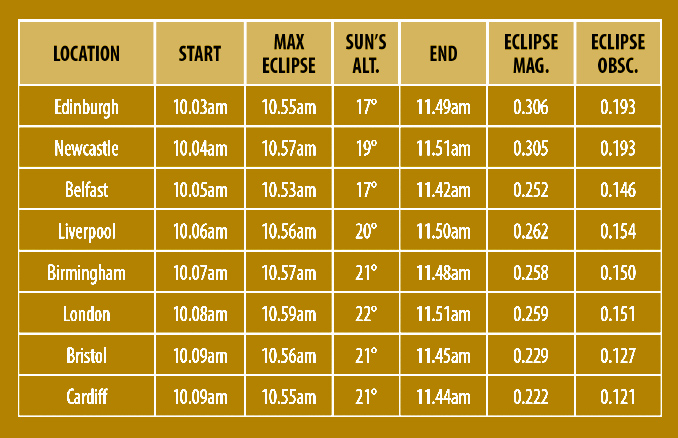 The star hidden inside this spectacular dusty cocoon is not only a red giant, but also a rare stellar breed known as a carbon star.

The alignment of Sun, Moon and Earth resulted in a partial solar eclipse on 13 September, visible only from the southern tip of Africa and Antarctica. But as NASA’s Solar Dynamics Observatory, or SDO, kept up its constant watch on the Sun, its view of the eclipse was photobombed by the Earth — the first time that an Earth eclipse and a lunar transit have coincided.