During last year’s celebrations of the fiftieth anniversary of the Apollo 11 Moon landing, a wave of nostalgia passed over amateur astronomers of a certain age. Humankind’s greatest achievement in exploration was once again on our minds. Clearly this did not escape Al Nagler and the folks at Tele Vue, and so the Tele Vue Apollo 11mm eyepiece was born: a limited edition, numbering just 300, to commemorate the first time humans stepped foot on the surface of another world. The eyepiece also celebrates Tele Vue’s – and Al Nagler’s – association with the Apollo programme and how it provided the inspiration for the wide-field eyepieces that Tele Vue produce.

For those of you who haven’t had the good fortune to meet the lovely Al Nagler, his history is steeped in telescope design and the US space programme. He was educated at the famous Bronx High school of Science, whose alumni include Neil DeGrasse Tyson, Leonard Susskind, who was one of the driving forces behind the development of string theory, and Marvin Minsky, who was one of the fathers of artificial intelligence and a scientific advisor on 2001: A Space Odyssey.

After a visit to the Hayden Planetarium in 1946, Nagler became hooked on all things space, and telescope-making in particular, and in the 1960s he found himself working at the Farrand Optical Company, designing the optics for visual simulators used to train astronauts in piloting the Gemini spacecraft and the Apollo Lunar Module. The Lunar Module simulator’s design called for a giant ‘eyepiece’ that used a mirror 2.4 metres (eight feet) wide and a lens 0.9 metres (three feet) in diameter to project real-time views of a 36-inch (91cm) television screen and celestial sphere through the lander’s windows. It allowed the training astronauts in the simulator to ‘fly over’ the images of the Moon as though those images were at infinity. It was this ‘fly over’ experience that has been the influence for Tele Vue’s beautiful widefield eyepieces that are a feature of many an amateur astronomer’s kitbags.

This is not the first time that Tele Vue has used Al Nagler’s connection to the space programme to market an eyepiece. A few years ago they launched the Ethos 3.7 with a 110-degree field of view. I was present at the eyepiece’s launch event at the North-East Astronomy Forum (NEAF) in Rockland County, USA, and Al kindly talked to me about his time on the Apollo simulator program and how it had inspired the Ethos 3.7. I own one of those eyepieces, and it is awesome: if you have a small telescope, such as an 80mm refractor, and you want to see a planet at high power, then it allows you to spend precious seconds watching the planet without the planet immediately zipping out of the eyepiece’s superwide field of view. I love mine, and the idea that the engineering came out of those bits of glass in the Apollo programme makes it extra special.

The Tele Vue Apollo 11mm is a different proposition. Whereas the Ethos design encompasses a full range of eyepieces, the Apollo 11mm is a one-off. An 11mm eyepiece is a slightly odd size, it’s not represented in any other Tele Vue eyepiece, so its unique in that respect. At £1,249, it is also excruciatingly expensive for an eyepiece, even for a limited edition Tele Vue eyepiece. It’s £300 more than the 21mm Televue Ethos eyepiece and the Nikon 17.5mm HD, and a whopping £700 more than the similarly-sized 13mm Tele Vue Ethos.

So, what do you get for your money? The packaging is special: it’s double boxed, with a fairly standard white cardboard box encasing a more special black and gold book-like presentation box that holds the eyepiece itself. Clearly the Apollo 11 black and gold box is not for field use, but is instead for displaying the eyepiece. Inside is a very nice laminated medal that includes the number of the eyepiece (out of 300), and the eyepiece itself is also numbered. I imagine that the really special numbered eyepieces, number 1 and 11 or perhaps any of the other Apollo numbers are tucked away at Tele Vue. I was pretty pleased to secure number 83 (8 + 3 = 11). Inside the box there is also a personal message from Al Nagler.

The eyepiece itself has a barrel shaped not unlike the Command Module of the Apollo capsule, especially with the twoinch adaptor removed. There is a ‘grippy ring’ near the top of the eyepiece and the usual integrated rubber cup around the eyepiece glass. It has dead straight sides with a somewhat lower profile than, for example, that of a Tele Vue Ethos 13mm. It has the words Apollo 11 stacked vertically down the barrel along with its unique number. It’s heavy (over 600 grams) but it certainly doesn’t feel as bulky as its stablemates, and it oozes quality, as you would expect from a Tele Vue product. 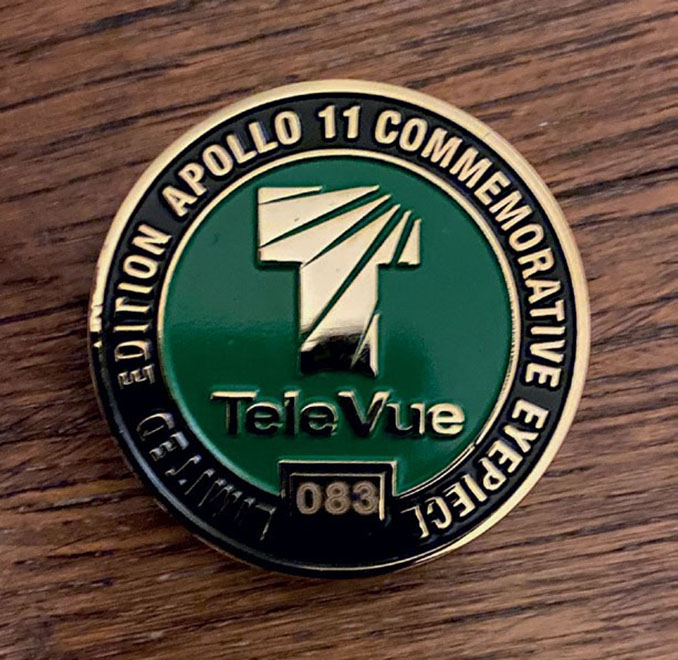 The Apollo 11’s field of view is 85 degrees, which is very similar to the much smaller 13mm Tele Vue Nagler (82 degrees) but it has the benefit of 19mm of eye relief instead of the 12mm of the Nagler, so when in use it’s almost like watching television. I remember the first time I looked through an Ethos 13mm and was blown away by the TV-like views. There has been speculation that this is the first of a new line of Tele Vue eyepieces, but when I checked with David Nagler (Al’s son, who now runs the day-to-day business at Tele Vue), he said this is not the case. That said, with each new eyepiece, new lessons are learned and the Apollo 11mm’s new profile, which makes it much easier for observers who use binoviewers, could be carried forward into a new range in the future. Viewing with the Apollo 11mm is a fully immersive experience. I used mine with a TEC140 refractor and a Baader prism diagonal. The views were spectacular – the ‘spacewalk’ style common to wide-angle eyepieces – and very comfortable, with 19mm of eye relief. Stars appeared sharp right to the edge of the field of view and when looking through the Apollo 11mm, you get the sensation of being able to see around corners as you approach the edge of the viewing area. In that respect, it’s not unlike the Tele Vue Ethos 3.7mm 110-degree eyepiece.

On the night that we tested the eyepiece from the edge of central London in Walthamstow, it wasn’t the best seeing and there was a little cloud around. Nevertheless, we were able to see both M81 and M82 in the same eyepiece field, which was very nice, especially given the urban location. The configuration of the TEC140 with the Apollo 11mm also easily split the double star Algieba (gamma Leonis). There was a little bit too much magnification for the Double Cluster in Perseus, although the two clusters, NGC 869 and NGC 884 just about fit inside the field of view, and we could easily pick out the colour of some of the red stars at the centre of NGC 884. The eyepiece exhibits no vignetting, as you would expect. I’ve been waiting for another clear night to try the eyepiece with my 80mm refractor, which I think will give lovely widefield views.

I especially wanted to try the eyepiece out on the Moon, since in theory it would be perfect for viewing the lunar landscape, but rain and high wind has stopped play on many occasions this winter. That said, when I have been able to use it, the eyepiece has performed extremely well and is barely heavier than its Ethos 13mm cousin, so it is very easy to use with all sizes of telescope.

Although the Apollo 11mm performs beautifully, its pricing and exclusivity may make it prohibitive for many potential customers, and certainly there are much cheaper alternatives in both Tele Vue’s other ranges and those of other manufacturers. However, I imagine those people like myself who are lucky enough to get one of these Apollo 11mm eyepieces will not be buying it for utilitarian use. There will always be someone who wants an Apollo 11mm, making it an ‘investment grade’ eyepiece.

The sad thing is that I suspect many of these eyepieces will never see starlight and will languish in a display cupboard for future generations to look at, much like expensive vintage cars and great art. It is, however, meant to be used and so it should be. If you can afford it, and you find one at a dealer, you’ll almost certainly be buying a piece of history and an heirloom. Happily, I count myself as a fan of this eyepiece and the people who made it. If you have the money to burn on the eyepiece, then you surely won’t be disappointed and certainly won’t lose money on it if you do decide to sell at some point in the future. But if you want one, then you’ll need to hurry before they’re all gone, and whatever the temptation to display it in a cupboard, please do use it, even if it’s only once in a while, just to remind yourself of the journey that humankind went on during the days of Apollo.

Richard Deighton is an amateur astronomer and a former chairman of Loughton Astronomical Society.

comNik Szymanek recently spent three consecutive nights testing the capabilities of Software Bisque’s new edition of The Sky, namely The Sky Imaging Edition. On night two, he finds out how well it autofocuses and autoguides his telescope.

The Helix Nebula: a big and good-looking planetary!

Despite the strong Moonlight pervading this Friday’s night sky, it’ll still be worth seeking out Perseid shooting stars as the shower perennially produces high rates of meteors