Strong hints have been found of a possible exomoon candidate orbiting a gas giant planet over 4,000 light years away in the constellation of Cygnus the Swan. Should the moon be confirmed later this year by the Hubble Space Telescope, it will be the first moon ever discovered around a planet beyond our Solar System.

The potential discovery has come from the Hunt for Exomoons with Kepler collaboration, which is led by David Kipping of Columbia University in New York. The project uses observations collected by NASA’s Kepler Space Telescope, which watches for dips in starlight as planets cross, or ‘transit’, the face of their host stars and block some of the light. 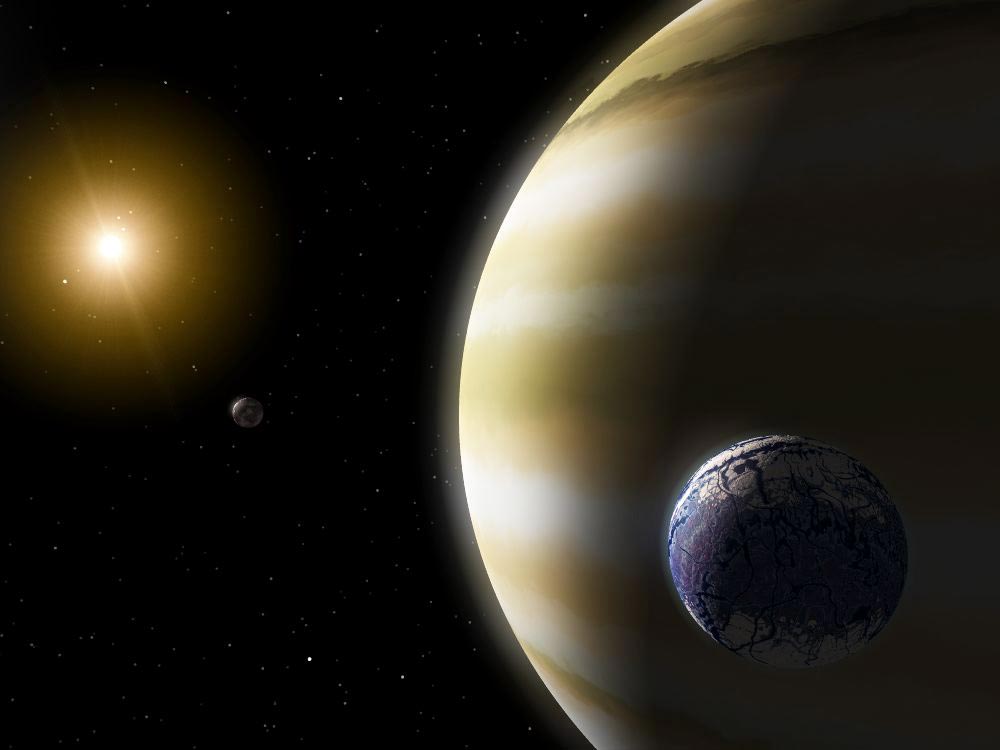 The idea behind hunting for exomoons is that natural satellites should also cause a dip in the starlight, either just before or just after their parent planets transit. However, given the size of moons compared to their planets, the dip in light caused by an exomoon should be small and hard to discern, even for Kepler.

To even the odds, Kipping’s team stacked together multiple ‘light curves’ (graphs showing how a star’s light output changes over time while a planet is transiting it) for each of the 284 planets they were studying, looking for recurring dips that could be attributed to exomoons. They only found one strong candidate, accompanying the planet Kepler-1625b.

At present Kipping’s team, which includes his Columbia colleague Alex Teachey and citizen scientist Allan Schmidt, are remaining cautious about the potential discovery. The signal of the possible exomoon was seen during three consecutive transits by Kepler, but that’s not sufficient to conclusively confirm the moon exists. The next transit is set to take place in October 2017 and the team have already acquired time on the Hubble Space Telescope to observe the planet and, hopefully, confirm that the moon exists.

If it does exist then it is an exceptionally strange moon quite unlike anything in our Solar System. The planet is enormous, with ten times the mass of Jupiter, while the proposed moon has a mass equivalent to Neptune. In some ways the system could be classed as a double planet, and it is unlikely that a moon of this size would have formed in orbit around its planet.

Planetary formation can be a chaotic affair, with planets capable of migrating inwards during their early growth phase as the protoplanetary disc of gas and dust encircling their star saps the planets’ angular momentum. So as Kepler-1625b migrated inwards, it may have run across a Neptune-sized world that it captured.

In this case, Kepler-1625b may have gained a ‘moon’, but theoretical models predict that normally migration is bad for moons, with gravitational encounters between planets stripping moons away from their parent worlds. The dearth of moons in the sample of 284 exoplanets studied by Kipping’s team suggest that these models are correct, meaning that the observations also imply that migration is a common occurrence in exoplanetary systems.

However, finding moons with masses similar to Earth’s Moon, or the Galilean moons of Jupiter, is a tough proposition and it is not yet certain how rare smaller moons really are. Should they be uncommon, then. the lack of moons will not necessarily impact the habitability of exoplanets. In the 1990s the French astronomer Jacques Laskar of the French National Centre for Scientific Research concluded that the presence of a large moon was important for stabilising the obliquity of Earth and hence our planet’s long-term stable climate. However, more detailed simulations run by Jack Lissauer of NASA’s Ames Research Center found that even without the Moon, Earth would wobble on its axis by only ten degrees, which is not enough to render the climate uninhabitable. Meanwhile, Lissauer also discovered that fast-spinning planets (with days less than ten hours long) or backwards-spinning worlds are able to stabilise their tilts without requiring the presence of a large moon. Therefore, the lack of exomoons need not be a barrier to habitable environments on exoplanets.

Astronomers have created the first large-scale map that shows stellar ages in the Milky Way by determining the ages of nearly 100,000 red giant stars, at distances of up to 50,000 light-years from the galactic centre. Notably, the map confirms that our home galaxy has grown inside out: in the present epoch, most old stars can be found in the middle, more recently formed ones in the outskirts.

Light from a supernova explosion in the nearby starburst galaxy M82 is reverberating off a huge dust cloud in interstellar space.

This composite Hubble Space Telescope image captures the positions of comet Siding Spring and Mars in a never-before-seen close passage of a comet.