Engineers have spotted two small breaks in the treading on the left middle wheel on NASA’s Curiosity rover, one of six wheels that have moved the robot nearly 16 kilometres (10 miles) across the Martian surface since landing in August 2012.

The two breaks appeared in an image taken on 19 March by the camera on the end of Curiosity’s robot arm. Ground controllers periodically use the science camera to inspect the condition of the rover’s wheels after noticing dings appearing faster than anticipated in 2013.

The latest damage occurred some time since 27 January, the last time the robotic arm camera looked underneath the rover’s chassis. The new wear and tear on the left middle wheel is the first time engineers have seen broken grousers, the zigzag-shaped treads on each wheel that bear much of the rover’s weight and provide most of the traction as it drives across Mars, according to a statement issued by NASA’s Jet Propulsion Laboratory in Pasadena, California.

The grousers extend about a 7 millimeters (quarter-inch) above the rest of each wheel’s thin aluminum skin, officials said.

Since the control team saw the first signs of damage to the 50-centimeter-diameter (20-inch) wheels, engineers put ground hardware through testing to determine how long the wheels will last. The engineers concluded that once three grousers on a wheel are broken, the wheel has used up about 60 percent of its operational life.

“All six wheels have more than enough working lifespan remaining to get the vehicle to all destinations planned for the mission,” said Jim Erickson, Curiosity’s project manager at JPL. “While not unexpected, this damage is the first sign that the left middle wheel is nearing a wheel-wear milestone.”

Mission planners also plotted Curiosity’s path around sharp rocks that could have worsened the wheel damage.

Curiosity has logged 16 kilometres (9.9 miles) of driving since landing inside Gale Crater on Mars in August 2012. The mission was supposed to last at least one Martian year — equivalent to about two Earth years — and has more than doubled its minimum lifetime.

The $2.5 billion mission discovered that the landing site inside Gale Crater was once habitable, harboring flowing water and the conditions necessary to support microbial life.

“This is an expected part of the life cycle of the wheels and at this point does not change our current science plans or diminish our chances of studying key transitions in mineralogy higher on Mount Sharp,” said Ashwin Vasavada, Curiosity’s project scientist at JPL.

Curiosity is currently studying sand dunes along the lower flank of Mount Sharp, a dome-shaped peak stretching around 5 kilometers (3 miles) above the crater floor. Mission planners will send the rover higher up Mount Sharp in the coming months and years to visit layers made up of different types of minerals, such as hematite, clays and sulphates.

The sulphate layer is the most distant destination identified by Curiosity scientists. NASA said reaching that region will require up to 6 kilometers (3.7 miles) of additional driving, within the left middle wheel’s projected remaining useful life.

Engineers have applied lessons learned from Curiosity to the design of NASA’s next Mars rover set for launch in July 2020. That spacecraft’s wheels will have cleats and curved titanium spokes meant to diminish potential damage from sharp rocks.

There’s a six-page report on the health of the Curiosity rover’s wheels in our December 2016 issue. Available in print or for PDF download. 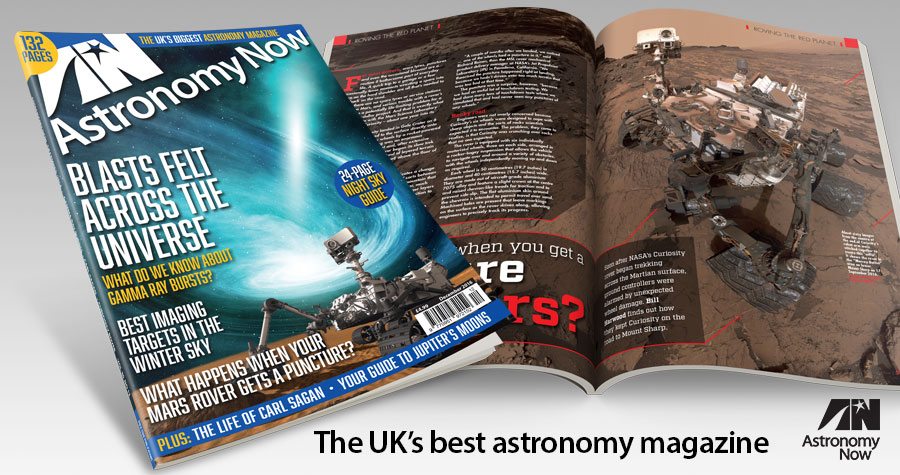 Fate of NASA’s InSight Mars mission to be decided soon

NASA is close to deciding whether to spend an extra $150 million to send the InSight lander to Mars in 2018 or cancel the mission after an instrument problem made the spacecraft miss a launch opportunity this year, with a verdict on the project’s future expected within weeks, officials said.

Scientists examining data from the Cassini mission’s final months reported this week unexpected measurements of Saturn’s gravity field and outer atmosphere, suggesting they may have to revisit theories about the planet’s rings and the forces that generate magnetic fields.