NASA’s Mars 2020 rover now has the six wheels it needs to rove about the red planet. On 13 June, engineers at NASA’s Jet Propulsion Laboratory in Pasadena, Calif., installed the rover’s port and starboard “mobility suspension,” the wheels and rocker bogies that will allow the robot to trundle across the surface and drive over small rocks and obstructions. Said David Gruel, the Mars 2020 assembly, test and launch operations manager at JPL: “Now that’s a Mars rover. With the suspension on, not only does it look like a rover, but we have almost all our big-ticket items for integration in our rearview mirror. If our rover had one.” Over the next few weeks engineers plan to install the rover’s robot arm, the SuperCam instrument and a 17-motor mechanism for caching rock and soil samples. 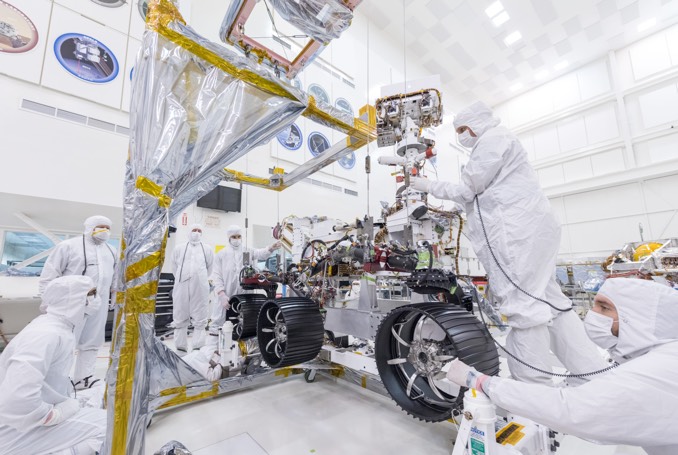 The rover’s wheels, each powered by its own motor, are made of aluminium and measure 52.5 centimetres (20.7 inches) in diameter. Each one features 48 cleats to improve traction on rock or sand. The front and rear wheels also are equipped with steering motors that will allow the rover to turn a full 360 degrees in place. Launch is targeted for July 2020 with landing in Jezero Crater on Mars on 18 February 2021.

Pausing on the slopes of Mount Sharp, NASA’s Curiosity Mars rover set back two black-and-white panoramas that were colourised to provide an “artistic” view looking back along its recent path with the rim of Gale Crater rising in the distance.

NASA’s Ingenuity Mars helicopter completes a successful test flight, becoming the first aircraft to fly in the atmosphere of another world. Four more flights are planned.