This Hubble Space Telescope image, and one from the European Southern Observatory, provide two views of a pair of galaxies that appear to be smashing into each other in a cosmic collision. But don’t be fooled. The face-on spiral galaxy is actually about 117 million light years from Earth while other is some 140 million light years away. They appear to be colliding thanks to a chance alignment when viewed from Earth. In the wider-angle ESO view below Hubble’s stunning close up, a dim, yellowish smudge can be seen toward the lower right, an ultra-diffuse galaxy and one of the faintest in the Hydra I galaxy cluster. UDG are extremely faint and lack the star forming gas of galaxy’s like the Milky way. 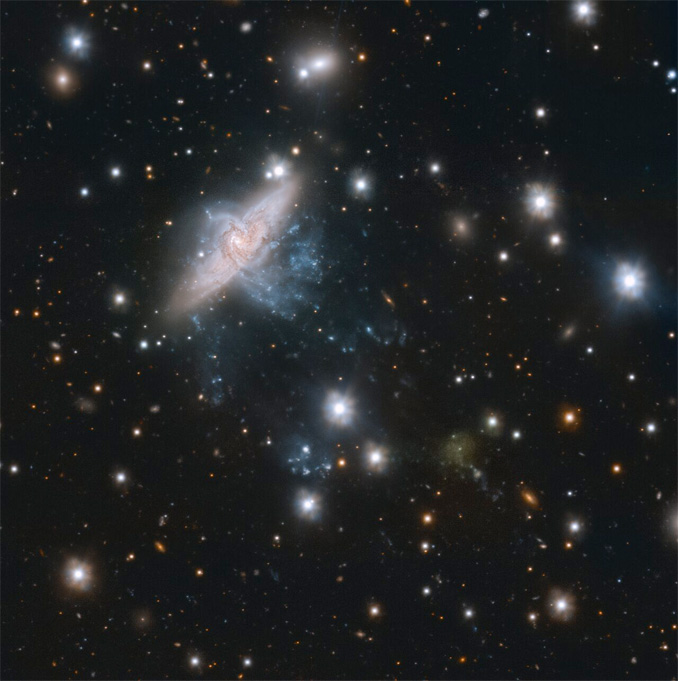 A tangled web this supernova weaves

Tangled clouds of gas from a destroyed star can be seen weaving their way through space in the Large Magellanic Cloud, the remnants of a Type 1a supernova that consumed a white dwarf in a once glorious blaze of light. Such supernovae are critical to measuring cosmic distances.

Zooming in on black holes is the main mission for the newly installed GRAVITY instrument at ESO’s Very Large Telescope in Chile. During its first observations, GRAVITY successfully combined starlight using all four 1.8-metre Auxiliary Telescopes. The first observations using GRAVITY with the four 8-metre VLT Unit Telescopes are planned for later in 2016.

A young star’s moment in the spotlight

A newly formed star lights up the surrounding cosmic clouds in this new image from ESO’s La Silla Observatory in Chile. Dust particles in the vast clouds that surround the young T-tauri star HD 97300 diffuse its light, like a car headlight in enveloping fog, and create the reflection nebula IC 2631.