Unlike the auxiliary cable that failed at the same facility on 10 August, this main cable did not slip out of its socket. It broke and fell onto the reflector dish below, causing additional damage to the dish and other nearby cables. Both cables were connected to the same support tower. No one was hurt, and engineers are already working to determine the best way to stabilize the structure.

A safety zone has been set up around the dish out of an abundance of caution and only personnel needed to respond to the incident are allowed onsite.

Officials haven’t determined why the main cable broke, but they suspect it is related to the extra load the remaining cables have been carrying since August. A monitoring team has been closely watching all the cables and platform since then as part of the facility’s safety and temporary emergency repair plan. Observers had noted and were tracking broken wires on the main cable that failed Friday. The facility was awaiting a team of engineers this week who were expected to begin temporary emergency repairs related to the August incident.

“This is certainly not what we wanted to see, but the important thing is that no one got hurt,” said Francisco Cordova, the director of the observatory. “We have been thoughtful in our evaluation and prioritized safety in planning for repairs that were supposed to begin Tuesday. Now this. There is much uncertainty until we can stabilize the structure. It has our full attention. We are evaluating the situation with our experts and hope to have more to share soon.”

The University of Central Florida, which manages the facility under a cooperative agreement with Universidad Ana G. Méndez and Yang Enterprises Inc. for the U.S. National Science Foundation, worked overnight with the engineering firms WSP, Thornton Tomasetti and Wiss, Janney, Elstner Associates Inc. to come up with a strategy to address the new break. UCF retained these firms in September in connection with the first cable. UCF also notified NSF, which owns the facility and NASA. Drones and cameras are also being used to continue to monitor the structure.

The team hopes to be able to reduce the tension in the existing cables at the tower and install steel reinforcements to temporarily alleviate some of the additional load that is being distributed among the remaining cables. Experts are being mobilized to do the work as quickly as possible. The team will attempt to expedite the arrival of two new cables that were already on order. That’s the current plan pending further evaluation, which will be taking place over the next few days. 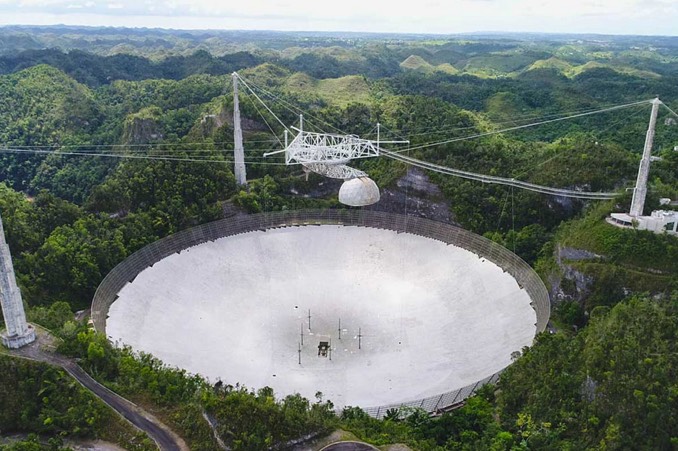 By following up on mysterious high-energy sources mapped out by NASA’s Fermi Gamma-ray Space Telescope, the Netherlands-based Low Frequency Array (LOFAR) radio telescope has identified a pulsar spinning at more than 42,000 revolutions per minute, making it the second-fastest known.

Engineers conclude the Arecibo Observatory’s 900-ton receiver is too unstable to repair in the wake of a second support cable failure, prompting decision to decommission the facility.