A search within a distant galaxy cluster for ghost-like particles that could provide evidence for String Theory and be a candidate for mysterious dark matter has turned up nothing – so far.

However, the stakes in this search are huge. “If these particles are eventually detected, they would change physics forever,” says Christopher Reynolds, the Plumian Professor of Astronomy and Experimental Philosophy at the University of Cambridge, who has led this latest quest for ‘axion-like particles’ (ALPs). 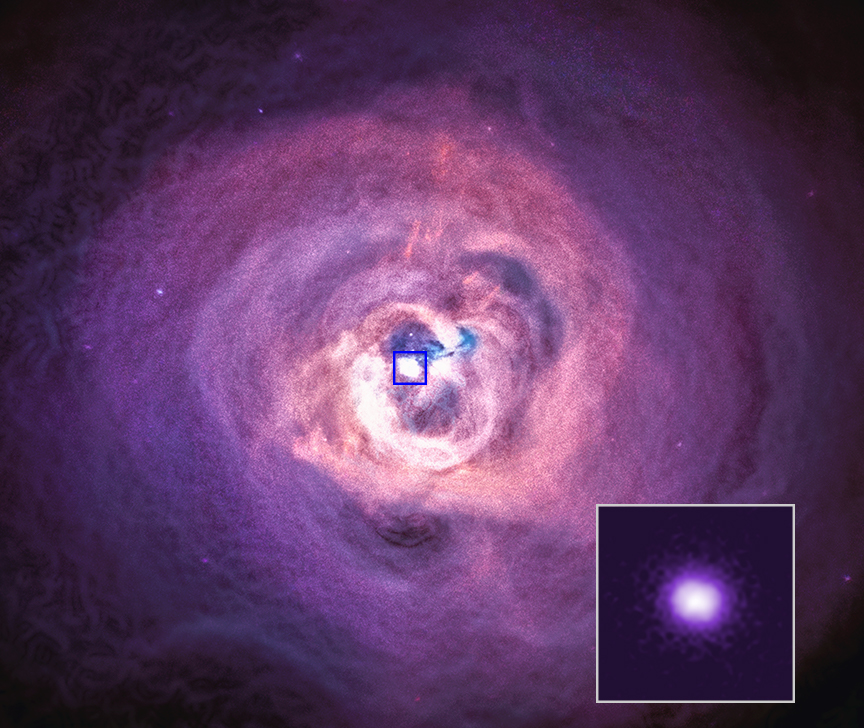 Axions are hypothetical particles. Although they have yet to be discovered, physicists predict that they should exist because they result from a phenomenon known as ‘CP symmetry’, in which both charge and a quantum property of particles known as ‘parity’ are conserved in particle interactions by way of an undiscovered quantum field, and it is this quantum field that would produce axions.

ALPs are not axions per se, and would have a much lower mass, but String Theory, which posits that all fundamental particles in the Universe are made up of tiny vibrating strings, proposes that ALPs could have formed as by-products of other quantum fields, again currently hypothetical, that would have caused the Universe to reheat after a brief burst of inflation had expanded it immediately after the Big Bang.

Conversion process
So, as Reynolds says, discovering ALPs would be a huge breakthrough. To that end, Reynolds has led a team that have used NASA’s Chandra X-ray Observatory to search for ALPs in the heart of the Perseus galaxy cluster, 240 million light years away. In particular, the team scrutinised the environment around the giant galaxy Perseus A (NGC 1275) at the centre of the cluster, in the hope to catch the presence of the elusive ALPs.

The trick in doing so is the understanding that, periodically, ALPs can in theory convert into photons, and vice versa, as they pass through a magnetic field. The likelihood that they will do so depends on the magnetic field strength and the length of the path that the ALP or the photon takes through that magnetic field. At the CAST experiment at CERN in Switzerland, scientists are looking for axions emitted by the Sun using an instrument ten-metres in length, enveloped in a magnetic field 10 teslas strong, meaning that the conversion value is 100 Tm (10 x 10). On the other hand, while Perseus A’s magnetic field is far weaker, averaging a billionth of a tesla, the field itself through which photons and ALPs could pass is half a million light years long (5 x 1021 metres), meaning that at five trillion Tm (10–9 multiplied by 5 x 1021), the conversion value is far greater than in CAST.

Using Chandra, Reynolds’ team searched for any abnormalities in the X-ray output from the vicinity of Perseus A that might indicate X-ray photons being either produced by ALPs, or being converted into ALPs. It’s not the first time this has been done – previous observations have searched for ALPs being produced around Messier 87 at the centre of the Virgo galaxy cluster – but the Perseus A study was four times as sensitive as the M87 observations.

“Our particular technique is sensitive to low-mass ALPs, from about 10–16 of an electron mass down to completely massless,” Reynolds tells Astronomy Now. The lack of a detection does not mean that ALPs do not exist, but it is a blow for String Theory, narrowing the range of potential masses that ALPs could have and therefore leaving them fewer places to hide, if they exist at all.

The dark matter connection
Any unseen particles are also candidates for the identity of dark matter, and it’s no different with ALPs.

“The dark matter connection is a subtle one,” says Reynolds. “ALPs may indeed be an important component – or all – of dark matter, but it is also possible that ALPs exist, yet do not constitute the dark matter.”

Some recent theories have speculated that dark matter could be composed of ALPs with masses of just 10–27 electron masses. (To give you some idea of how tiny that value is, consider that the mass of an electron is just 9 x 10–31 kilograms.) However, the Chandra observations are not quite the blow to these theories that you might expect, according to Reynolds.

“The most natural models for producing enough ALPs in the early Universe to be today’s dark matter would give them such small coupling to photons that we (i.e the Chandra observations) wouldn’t be sensitive to them anyway,” he says. And, despite the severe constraints that the search in Perseus A has now placed on the properties of ALPs, “the landscape of possible models is huge and so we must just keep looking with every tool we can to explore the parameter space.”

The research is published in Astrophysical Journal

Astronomers using the 870 million-pixel Hyper Suprime-Cam camera on the 8.2-metre Subaru telescope in Hawaii have begun a wide-area survey of the distribution of dark matter in the universe.

Over the last year, researchers have observed some very faint, diffuse galaxies. These so-called ultra-diffuse galaxies (UDGs) are as faint as dwarf galaxies but are distributed over an area just as large as the Milky Way. Now, a solution to the mystery of how such galaxies form has been found.

Dark matter is called “dark” for a good reason. Although they outnumber particles of regular matter by more than a factor of 10, particles of dark matter are elusive. Now, by measuring the mass of a nearby dwarf galaxy called Triangulum II, astronomers believe they may have found the highest concentration of dark matter in any known galaxy.