The intrepid Curiosity rover has scaled its greatest challenge so far, a steep slope inclined at 31 degrees to the horizontal, leading to a cliff-top region known as Greenheugh Pediment. 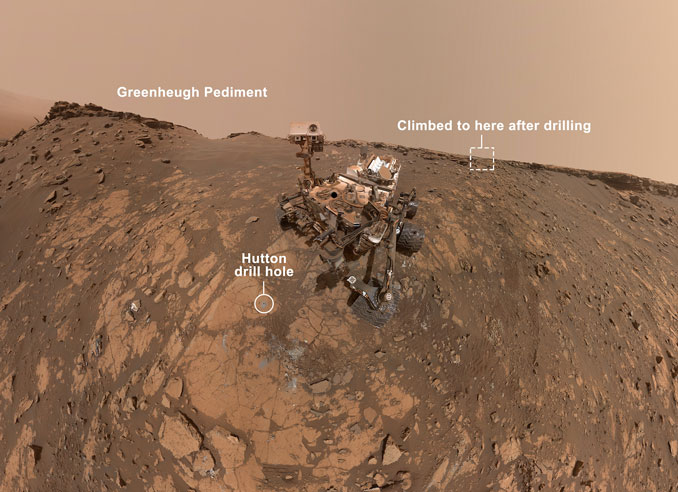 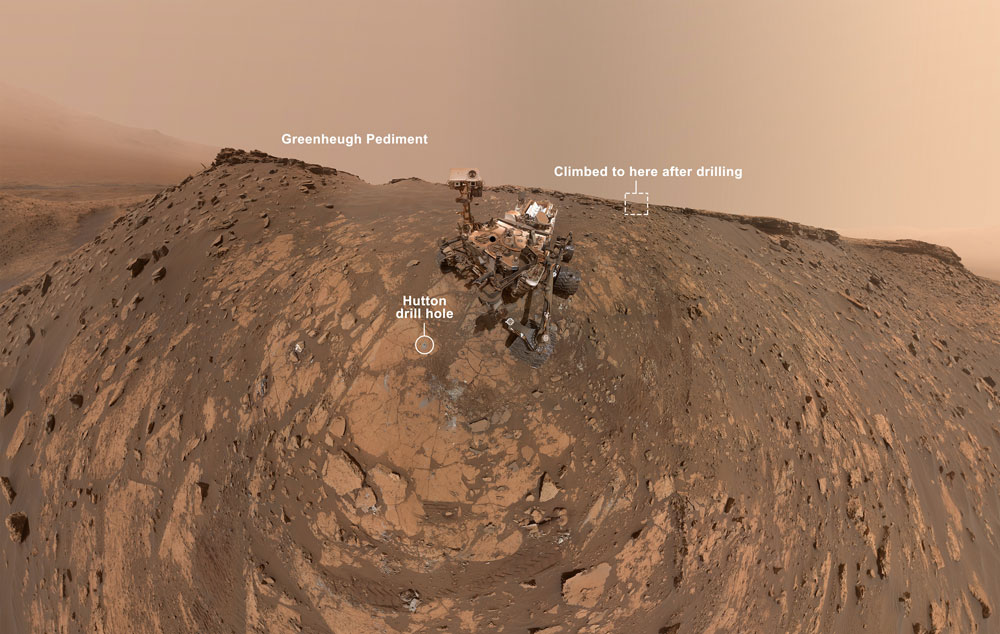 A pediment is a broad slab of bedrock, and this particular pediment was identified as a feature of geological interest even before Curiosity landed on Mars in August 2012. Planetary scientists strongly suspect that the pediment once extended northwards for several kilometres, linking it with the Vera Rubin Ridge – a rocky outcropping rich in an iron-oxide mineral called hematite, which formed billions of years ago in standing water or hot springs within Gale Crater, which Curiosity is exploring.

The climb
To reach the pediment, which is in the foothills of the five-kilometre tall Mount Sharp, Curiosity had to climb. The ascent took three separate drives (each ‘drive’ consists of a set of commands uplinked to the rover from Earth) up the sandy slopes, with the second drive inclined at 31 degrees, just shy of the climbing record of 32 degrees set by Curiosity’s now defunct cousin, the Opportunity rover, in 2016. There was never any danger that Curiosity would topple over though – it’s rocker-bogie suspension system means it would still be safe on a 45-degree incline.

Halfway up, Curiosity stopped to drill a hole in a nearby sample of bedrock, nicknamed ‘Hutton’, so that rock powder could be extracted and analysed within the rover’s onboard laboratory, a suite of instruments collectively referred to as Sample Analysis on Mars (SAM). While its instruments were working, Curiosity took a selfie, dated 26 February (sol, or Martian day, 2,687 of the mission) showing it perched on the slope, the Greenheugh Pediment 3.4-metres above it, and Mount Sharp climbing into the sky at the upper left of the picture.

How to take a Mars selfie
You may ask, how did Curiosity take this self-portrait? To do so, it utilises a camera on the end of its robotic arm called MAHLI, the Mars Hand Lens Camera. Like all good geologists, Curiosity is never without its magnifying glass, which is usually employed to examine sand grains, for example. However, by twisting and contorting its robotic arm, Curiosity can use its magnifying glass, MAHLI, to take lots of pictures of the rover itself, and its surroundings – 86 images, in all, were snapped and then stitched together by scientists on Earth produce this panoramic self portrait. The camera deliberately misses out photographing the robotic arm, which is why we can’t see it reaching towards the camera in this image.

Curiosity reached the top of the slope, and Greenheugh Pediment, on 6 March, Earth-time – sol 2,696 of the mission – and its now beginning its exploration of the geology that is presented before it, using its array of instruments.

MAHLI and the Alpha Particle X-ray Spectrometer (APXS) will scrutinise the composition of surrounding rocks, including wind-resistant outcrops formed of layers of sandstone. Meanwhile, the rover’s ChemCam (Chemistry and Camera complex) will sweep across the landscape, firing laser beams at targets of geological interest to vaporise part of their surfaces, allowing Curiosity’s spectroscopic camera to then analyse the chemical composition of the resulting vapour to tell planetary scientists about what minerals the rock is made from.

Finally, the rover’s navigation cameras (Navcam) will search the terrain for dust devils while both Navcam and Mastcam, which is a mast-mounted set of high-resolution cameras, will gaze across the surrounding landscape to assess the dustiness of the atmosphere.

Martian valleys could have been carved by surprisingly little water

Vast valley networks on Mars have suggested that water may have flowed there for millions of years. Now a study at Brown University suggests the valleys could have been carved by much less water in as little as a few hundred to 10,000 years. The findings are consistent with the idea that early Mars may have been cold and icy, with surface water flowing sporadically in response to short-term climate changes.

One second of faulty data led to the destruction of a European spacecraft on final descent to Mars in October.

NASA’s Ingenuity Mars helicopter completes a successful test flight, becoming the first aircraft to fly in the atmosphere of another world. Four more flights are planned.