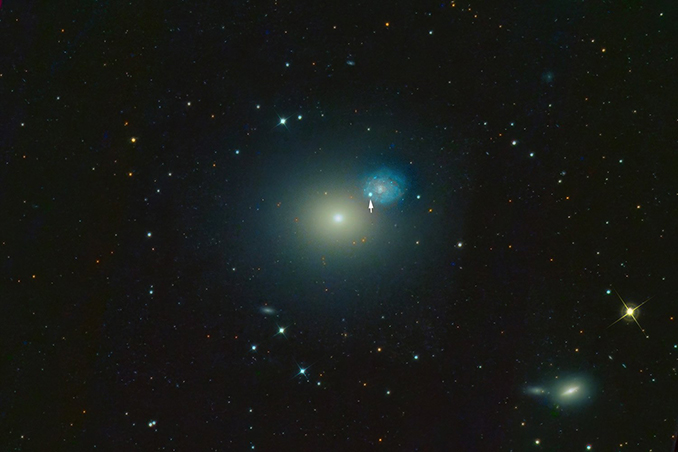 Supernova 2022hrs was discovered by amateur astronomer Koichi Itagaki on April 16.619 (14:50h UT) in NGC 4647, an intermediate spiral galaxy in the constellation of Virgo. He used a 0.5-metre, f/6 telescope and a CCD camera. The supernova shone at around magnitude +15 at discovery and has since brightened by over two magnitudes, with estimates at the time of writing (26 April) hovering around magnitude +12.5.

A low-resolution spectrum of the transient was captured just over five hours after discovery by Claudio Balcon, using a FOSC-ES32 spectrograph attached to a 0.2-metre telescope, in the course of Italian Supernovae Search Project(italiansupernovae.org). The spectrum resembles that of a type-1a supernova (a scenario with a degenerate white dwarf star as the progenitor rather than core-collapse of a massive star [type-II]) about two weeks before maximum light. It’s possible then that the supernova may brighten further during the remainder or so of April.

NGC 4647 is a close companion on the sky (~3’ separation) to the brighter and larger galaxy Messier 60 (NGC 4649), which lies to the south-east. Indeed, deep images show they overlap. M60 is an elliptical galaxy (some sources list it as a lenticular galaxy (type-S0) that glows at magnitude +8.8 and has an apparent dimeter of 7.2’ x 6.2’. Together, NGC 4647 and M60 are catalogued as Arp 116 in Halton Arp’s Atlas of Peculiar Galaxies. NGC 4647 is listed as lying 63 million light yers away, with M60 placed 6 million light years closer. At that distance, NGC 4647 would be an outlying member of the Virgo Cluster of Galaxies.

Virgo is presently very well placed on late evenings. NGC 4647 and M60 lie on the eastern outskirts of the main agglomeration of Virgo Cluster galaxies that straddle the boundary between Virgo and Coma Berenices. Point your telescope 4.6 degrees slightly north of due west from magnitude +2.8 Vindemiatrix (epsilon Virginis).

By 10pm BST, Arp 216 lies 46° high in the south-eastern sky, culminating 50° by 11.20pm. Under a dark and transparent sky, the supernova should be visible through a 200–250mm (eight- to ten-inch telescope). Advantageously, the Moon is out of the way presently in the evening sky, reaching ‘new’ on 30 April.

Did a low-mass supernova trigger formation of solar system?

About 4.6 billion years ago, a cloud of gas and dust that eventually formed our solar system was disturbed. The ensuing gravitational collapse formed the proto-Sun with a surrounding disc where the planets were born. Now, forensic evidence from meteorites provides conclusive evidence that a low-mass supernova was the trigger.

Scientists will now be able to measure how fast the universe is truly expanding with the kind of precision not possible before. This, after an international team of astronomers led by Stockholm University, Sweden, captured four distinct images of a gravitationally lensed Type Ia supernova, named iPTF16geu.

An astronomer at the University of California, Berkeley, has found a massive galaxy within the MACS J1149 galaxy cluster that is gravitationally bending and magnifying light to create four separate images of a distant supernova.