The United Arab Emirates’ Hope Mars probe, China’s Tianwen 1 spacecraft and NASA’s Perseverance rover are on the doorstep of Mars seven months after launch, all arriving within about a week of each other to open a new era in the exploration of the red planet.

UAE’s Hope orbiter is the first planetary probe launched by an Arab nation. It was on course to brake into orbit around Mars on 9 February, firing its thrusters for 27 minutes to slow down enough to slip into an elliptical “capture” orbit around the planet’s equator.

After tests and checkout, flight controllers plan to manoeuvre the spacecraft into a science orbit measuring 20,000 by 43,000 kilometres (12,400 by 26,700 miles) to give its three science instruments – a high-resolution camera and two sophisticated spectrometers – a global view of the martian atmosphere around the clock, in daylight and darkness.

The day after Hope arrives in orbit, China’s Tianwen 1 spacecraft, an orbiter-lander combination, will brake into an elliptical orbit around Mars’ poles. After mapping the world below for several months, the orbiter will release a landing craft that will descend to a rocket-powered touchdown on a broad plain known as Utopia Planitia.

The 530-pound six-wheel rover, equipped with powerful cameras, a ground-penetrating radar and other instruments, will roll off the lander’s upper deck using extendable ramps to reach the surface. The rover mission is expected to last at least 90 days while the orbiter’s design life is at least one martian year.

NASA’s $2.4 billion Perseverance rover is on track to plunge into the martian atmosphere on 18 February, descending directly to the surface. Like the Curiosity rover before it, Perseverance will be lowered to touchdown by a rocket-powered “sky crane” descent vehicle.

The nuclear-powered rover is equipped with a battery of sophisticated instruments and sample collection systems designed to look for past signs of microbial life in and around the rocky remnants of an ancient river channel and delta that once fed a deep lake in the bowl of Jezero Crater.

Perseverance will collect promising soil and rock samples, package them into small tubes and place them on the surface for eventual retrieval by another lander in a joint NASA-European Space Agency mission to pick them up and launch them back to Earth at the end of the decade.

Join us for an evening on Mars 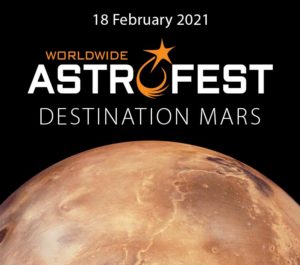 Astronomy Now’s AstroFest conference goes worldwide this year. Since 1992 amateur and professional astronomers have converged on London to hear about the latest discoveries in astronomy and space exploration. In 2021, the event is blasting off into cyberspace until we’re able to meet again in person.

Our Worldwide AstroFest 2021 season of online presentations starts on 18 February when we invite you to join us for an evening on the Red Planet. You’ll hear from expert speakers and then watch live as NASA’s Perseverance rover lands at Jezero Crater to begin a new era of Mars exploration. This special event will be hosted by Stuart Clark and Lucie Green and attendees will get a chance to pose questions to the experts.

NASA’s longest-lived mission to Mars has gained its first look at the Martian moon Phobos, pursuing a deeper understanding by examining it in infrared wavelengths.

Martian valleys could have been carved by surprisingly little water

Vast valley networks on Mars have suggested that water may have flowed there for millions of years. Now a study at Brown University suggests the valleys could have been carved by much less water in as little as a few hundred to 10,000 years. The findings are consistent with the idea that early Mars may have been cold and icy, with surface water flowing sporadically in response to short-term climate changes.

Now you see it, now you don’t: what happened to Mars’ water?

New research indicates most of the water that once flowed and pooled on Mars may still be there, locked in minerals making up the planet’s crust.