NASA’s New Horizons probe is on course and dutifully executing its encounter sequence software as it races toward an action-packed New Year’s Day flyby of Ultima Thule, the most distant solar system body ever targeted for up-close observations.

“Things could not be going better,” Principal Investigator Alan Stern told Astronomy Now on Saturday. “The spacecraft’s in perfect health, the team is assembled and everything is going very, very well. We can’t wait to unwrap Ultima Thule and see what it’s all about.”

Four hours later, the nuclear-powered spacecraft will will turn back toward Earth and send a status report to waiting scientists and engineers gathered at Johns Hopkins University’s Applied Physics Laboratory near Baltimore, Maryland. A few hours after than, the first high-priority images and other data will begin the 6.6-billion-kilometre (4.1-billion-mile) trip back to Earth, taking six hours and eight minutes to cross the gulf.

The first high-resolution images are expected to be released during a briefing at the Applied Physics Lab on 2 January.

“Across the whole team, people are ready, they’re in the game, we can’t wait to go exploring,” Stern said on 28 December. “It’s been three-and-a-half years (since the Pluto flyby), we’ve worked so hard, people are ready to see that payoff and see what we can learn about the birth of our solar system.”

Scientist do not know what to expect. Ultima Thule, little more than a dim point of light to even the Hubble Space Telescope, is known as a “cold classical” Kuiper Belt body, meaning it has a nearly circular orbit only slightly inclined to the plane of the planets. It is an untouched relic left over from the birth of the solar system 4.6 billion years ago.

Based on occultation observations from Earth, Ultima Thule appears to be an elongated body about 30 kilometres (19 miles) across, possibly a dual-lobed contact binary or two physically separated but gravitationally bound bodies.

In another early mystery, images from New Horizons do not show any discernible changes in reflected light from Ultima Thule. Scientists were expecting variations, which would indicate Ultima’s rate of rotation, but no such changes could be clearly seen within days of the encounter.

Stern said the flyby will put many questions to rest.

“All that stuff and more, because we’re not just going to take imagery,” he added. “We map its surface, we map it in colour and in addition to that, we map it in stereo so we have topography everywhere. We’ll not just determine its composition, but we map it from place to place to see if it’s the same everywhere or if it’s made up of smaller building blocks.”

Find out more about the New Horizon’s encounter with Ultima Thule in the January issue of Astronomy Now. Get your copy in the shops or order online. 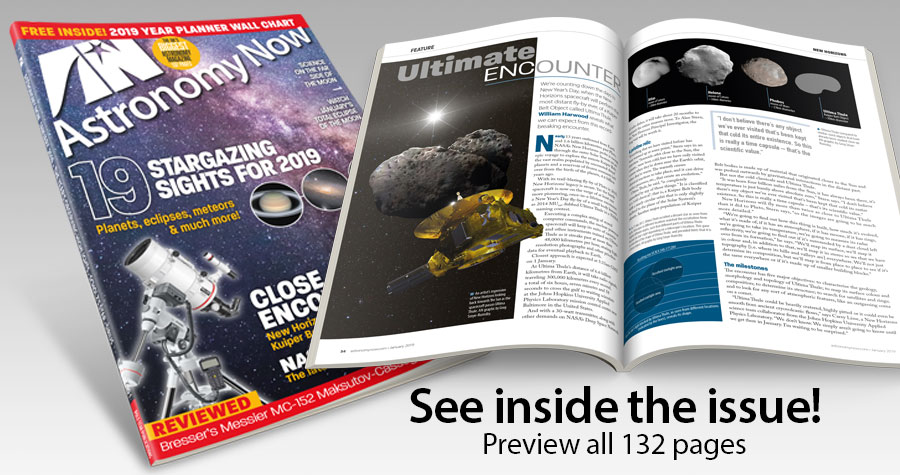 It is almost five months since New Horizons’ epic encounter with Pluto, but the captured images and data will stream back to Earth across 3 billion miles of interplanetary space for a further 11 months. The first in a series of the best close-ups of the dwarf planet that humans may see for decades have been released, obtained when the spacecraft was just 15 minutes before closest approach during the 14 July flyby.

A planet discovered last year sitting at an unusually large distance from its star — 16 times farther than Pluto is from the Sun — may have been kicked out of its birthplace close to the star in a process similar to what may have happened early in our own solar system’s history. The planet’s 13-million-year-old parent star is known as HD 106906 and lies 300 light-years away.

NASA’s New Horizons spacecraft made a historic New Year’s encounter with an object nicknamed Ultima Thule in the Kuiper Belt a billion miles beyond Pluto. The probe passed around 3,500 kilometres from the mysterious object at 0533 GMT on New Year’s Day, making it the most distant Solar System body ever explored up close.