Mercury is now visible soon after sunset in the west-north-western sky. If you’ve never seen the innermost planet then this is as good a chance as you’ll get this year to track it down and end your dogged pursuit of the most elusive of the major planets.

Mercury is troublesome to locate and difficult to observe, as, outside of observing it in broad daylight, it’s visible only close to dawn or dusk as it never strays too far from the Sun’s glare. On 29 April, Mercury pulls out to greatest eastern elongation (20.6°) from the Sun to offer its best evening apparition (a period of visibility) for this year. Mercury always shines at its brightest at the start of evening apparitions, so find yourself an observing location with a decent view to the west to north-western sky and try to catch it as soon as you can.

At sunset from London (at about 8.10pm BST) on 24 April, Mercury, shining at around magnitude –0.3, lies at an elevation of around 18 degrees (azimuth ~283°). From Manchester sunset is at about 8.26pm, when Mercury sits a degree or so lower, while the Sun sets at about 8.37pm from Edinburgh, with Mercury lying just about 16 degrees up. Remember, before sweeping for Mercury close to the horizon,whether with the naked eye or especially through optical aid, make absolutely sure that the Sun has set from your observing location.

About 40 minutes after sunset marks the end of civil twilight (when the Sun lies six degrees below the horizon), by which time you’ll have a much better chance of spotting Mercury with the naked eye. Mercury now lies an altitude of around just 11° (~ azimuth 290°). It’s not that easy to gauge altitude and angular separation on the night sky, especially for beginners. To get a good idea of Mercury’s altitude about the horizon, look overhead and you should see the familiar celestial landmark of the Plough asterism in Ursa Major. The distance between magnitude +1.8 Dubhe (alpha UMa) and magnitude +2.4 Phecda (gamma UMa), the stars marking the north-western and south-eastern (upper-right and lower-left) corners of the Plough’s ‘body’, is around 10 degrees. Another neat trick is to hold out a fist at arm’s length; the width across your knuckles covers about 10 degrees.

Mercury and Venus are termed inferior planets, as they lie closer to the Sun than Earth, the only two planets in the Solar System that do. As such, Mercury (and Venus) goes through ‘Moon-like’ phases, which change rapidly and can be followed through a small telescope; Mercury whizzes around the Sun in a 87.969-day-orbit. On 24 and 25 April, the planet shows a half-phase like a first-quarter Moon. By the end of April, Mercury has slimed down to a 33 per cent crescent phase.

During moments of steadier seeing in less-turbulent air, it may be possible to glimpse some vague light grey markings on Mercury’s rocky surface. Try a light-red filter (Wratten 21 or 23A) to boost the contrast with the bright sky. The former has 50 per cent light transmission and produces a brighter though less-effective view. Red or deep-red filters (Wratten 25 or 29) are more useful for large-aperture telescopes.

When imaging Mercury through a moderate- to large-aperture telescope (say above 150mm [six-inches] in aperture), either an infrared (IR) or an ultraviolet (UV) filter will help improve the visibility of dark markings (surface detail) on Mercury and reduce destructive seeing effects.

Mercury peaks at an altitude just less than 12 degrees (from London) at the end of civil twilight between 27 and 29 April, when it fades from magnitude +0.1 to +0.4. At the end of April and into early May, Mercury slips south of thewonderful Pleiades open star cluster (Messier 45) in Taurus. The planet remainson show through the first 10 days or so of May, although its relative faintness(~magnitude +1 to +2) will make it much harder to spot. 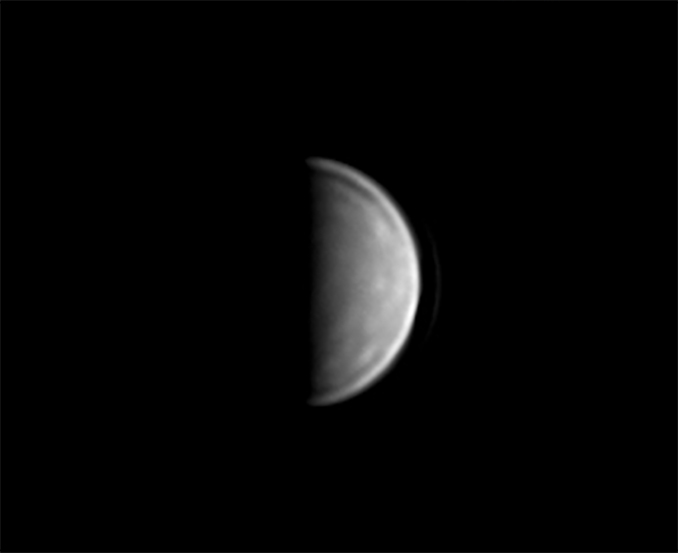 Watch out tonight (13th/14th) and tomorrow night (14th/15th) for the welcome return of the Geminid meteor shower.

Don’t miss out on Messier 51, the wonderful Whirlpool Galaxy

Magnificent Messier 51 (NGC 5194), the Whirlpool Galaxy in Canes Venatici, is without doubt the best and most famous example of a spiral galaxy that is presented face-on to our perspective.

The Helix Nebula: a big and good-looking planetary!