On the morning of Thursday 10 June, there’s a partial eclipse of the Sun visible across the length and breadth of the UK. This special and spectacular event happens when the Moon appears to take a significant bite out of the Sun as it moves between us and the Sun, partially blocking the Sun’s disc from our view. Furthermore, the Sun is favourably placed throughout the eclipse, lying between about 45 and 60 degrees above the horizon.

Any eclipse of the Sun is an event to be cherished by astronomers, especially amateur observers, and this eclipse is probably the major observing event in the 2021 observing calendar. The fickle UK climate often spoils such special events – those of us old fogeys with long memories still remember with chagrin the ill-fated 1999 Cornwall total eclipse of the Sun.

Checking in now with various weather apps offers some hope of sunny spells on Thursday across most of the UK. So let’s keep everything crossed for an accurate forecast, with plenty of UK-wide clear blue sky from early morning into the early afternoon.

The partial phases of this eclipse, which are also visible across large parts of Europe and Asia, are the most significant since the total eclipse of 20 March 2015, when observers in Scotland witnessed 97.3 per cent of the Sun obscured. Observers north of the border are most favoured this time around too, with over 43 per cent of the Sun covered, while observers in the south of England have to settle for a still impressive 30 per cent blocked. These values refer to the ‘magnitude of the eclipse’, which is the fraction of the diameter of the Sun’s disc that is covered by the Moon (it can be expressed either as a percentage or as a decimal fraction [i.e. 31.6% or 0.316]. Eclipse obscuration is the fraction of the Sun’s area occulted by the Moon.

When does the show start?

The partial phases start shortly after 10am BST (09:00 UT) on 10 June, with the Sun over 40 degrees above the eastern horizon. How large a partial eclipse you’ll witness, and the timings of the beginning, maximum extent and conclusion of the eclipse depend upon where you live in the UK. 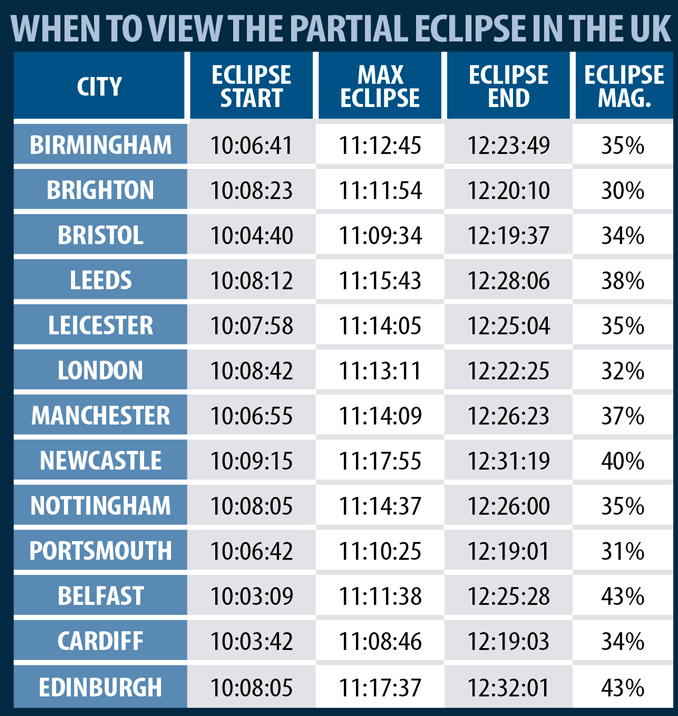 As previously stated, those eclipse watching from Scotland will see the biggest chunk of the Sun missing ; in Edinburgh, the Moon will encroach across 43.1 per cent of our star’s diameter at maximum eclipse, which occurs at about 11.17am BST (10:17 UT).

The Sun is a very dangerous body to observe at any time. Indeed, any astronomical observation made while the Sun is above the horizon is fraught with danger, and that risk is magnified many times over when the Sun itself, whether in eclipse or otherwise, is the object of study. Serious or even permanent damage to your eyesight may easily be the result if the Sun accidentally enters the field of view of any telescope (or binoculars) you are looking through. One can never underestimate the strength of the Sun’s focused light and heat.

At NO POINT during this eclipse of the Sun is a total eclipse visible, when the whole of the Sun’s disc is covered by the Moon and it’s safe to view the Sun directly (during totality). Whenever ANY part of the Sun’s disc is visible, as it is throughout this eclipse, you MUST NOT view it or image it directly. Even seasoned, experienced observers know they have to be extremely careful and always follow tried and tested safe observing routines.

How can I view the eclipse safely?

One of the safest and simplest methods of observing the eclipse is the tried and trusted ‘projection’ method, by using a pair of binoculars or a small telescope (refractors are best) to project the solar disc onto a piece of white card (while covering the optics of any attached finderscope or supplementary device which is also pointing in the Sun’s direction).

If the viewing screen of card is protected, or shadowed, by another piece of card, which is slid onto your telescope’s tube, you should get a better, more contrasty view of the solar disc.

Telescope’s up to 75mm (~three inches) in aperture are suitable (heat build-up occurring through larger-aperture telescopes can be dangerous), though you can use a larger aperture fitted with a similarly sized aperture stop. When attempting to place the Sun’s disc on the viewing screen, NEVER look through the instrument’s eyepiece to do so; watch for the minimised shadow cast by the observing screen. By the way, don’t use your best eyepiece for this method!

If you prefer to view the eclipse directly through the eyepiece of a telescope, then you’ll need a full-aperture solar filter that’s manufactured by a well-known and respected name in astronomy. Filters made of Mylar film are the cheapest and are perfectly satisfactory (check first there are no pinholes in it). Those made of metal-coated glass are the Rolls-Royce of filters.

A small, dedicated hydrogen-alpha solar telescope, such as those produced by Coronado, DayStar and Lunt, will give great views of the eclipse.

Missing out on an annular eclipse of the Sun

Unlike the partial phases seen across the UK in 1999 and 2015, there’s no total eclipse of the Sun – the single most dramatic and thrilling event that astronomers can experience – to be enjoyed at any point on Earth’s surface this time round. An annular eclipse of the Sun, now popularly known as a ‘ring of fire’ eclipse, takes place for lucky observers positioned under the narrow path of the Moon’s umbral shadow as it sweeps across eastern Canada and clips north-western Greenland and the far north-eastern corner of Russia.

An annular eclipse of the Sun occurs at new Moon, but when the Moon appears smaller in the sky than at a total eclipse, and its apparent diameter is not sufficient to cover all of the Sun’s disc.

The next total eclipse to hit landfall in the UK isn’t until 23 September 2090! However, there’s not too long until the total eclipse of the Sun on 2 August 2027, which can be seen in the south of Spain and offers the chance of viewing a massive 6 minutes and 28 seconds of totality. The path of totality clips the far south of Spain, hitting Gibraltar (totality here lasts for 4 minutes 28 seconds), and then tracks across North Africa, including the tourist hotspot, Luxor, in Egypt, where the maximum eclipse occurs.