New images of Ultima Thule, the small chunk of primordial debris NASA’s New Horizons probe zoomed past on New Year’s Day, came into much sharper focus on Wednesday, revealing a snowman-shaped object made up of two smaller, roughly spherical bodies that gently collided and stuck together during the birth of the Solar System 4.5 billion years ago.

“We think what we’re looking at is perhaps the most primitive object that has yet been seen by any spacecraft and may represent a class of objects which are the oldest and most primitive objects that can be seen anywhere in the present Solar System,” said Jeff Moore, a New Horizons co-investigator. 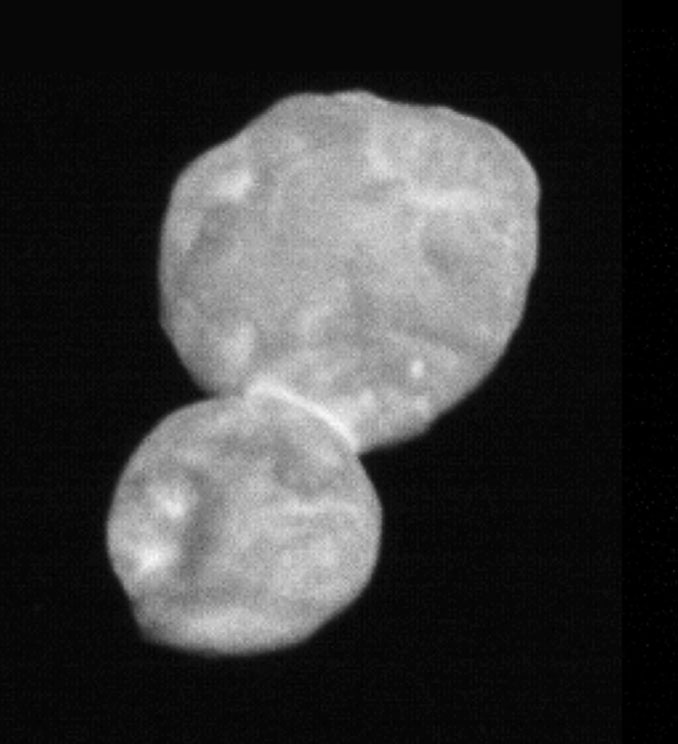 Like a time machine of sorts, Moore said New Horizons “has brought us back to the very beginning of Solar System history, to a place where we can observe the most primordial building blocks of the planets.”

Since its discovery by the Hubble Space Telescope in 2014, Ultima Thule has been little more than a dim speck of light in even the most powerful instruments. By measuring how Ultima blocked out the light of a star while passing in front as viewed from Earth, researchers concluded it was an elongated body of some sort but little else was known.

That all changed this weekend when New Horizons, now a billion miles beyond Pluto, moved close enough for its most powerful camera to begin detecting hints of structure.

In initial images released Monday and Tuesday, taken at distances of more than 480,000 kilometres (300,000 miles), all that could be discerned was a blurry, elongated shape with thicker, lobe-like features on each end of a 32 kilometre-long body. The fuzzy shape reminded some viewers of a bowling pin or perhaps a peanut.

“That image is so 2018,” joked Alan Stern, the principal investigator, moments before unveiling the latest photo at Johns Hopkins University’s Applied Physics Laboratory near Baltimore.

“Meet Ultima Thule!” he said as the new image was presented on a large projection screen. “Just like with Pluto, we could not be happier. What you’re seeing is the first contact binary ever explored by spacecraft. It’s two completely separate objects that are now joined together.”

Taken at a distance of about 80,000 kilometres (50,000 miles), well before the point of closest approach New Year’s Day, the black-and-white image shows a still somewhat blurry view of two bodies joined together at a relatively narrow neck. Researchers promptly named the large lobe “Ultima” and the smaller lobe “Thule.”

The “bilobate” body has a distinctly reddish hue, no obvious craters and rotates once every 15 hours.

It was the first close-up view of what is thought to be a commonplace member of the remote Kuiper Belt, a vast reservoir of icy debris beyond the orbit of Neptune.

Despite the enormous velocity, the dimness of the sun some 6.5 billion kilometres (4.1 billion miles) away and the distance between New Horizons and its target — roughly the same as Los Angeles to Washington D.C. — the spacecraft’s cameras were able to capture features as small as 1,500 metres (500 feet) across in the image released Wednesday.

“It’s only really the size of something like Washington D.C.,” Stern said. “It’s about as reflective as garden variety dirt, and it’s illuminated by a sun that’s 1,900 times fainter than it is outside on a sunny day here on the Earth. So we were basically chasing it down in the dark at 32,000 mph.”

Even sharper pictures are expected to be released on Thursday, but communications with the spacecraft, on the far side of the sun as viewed from Earth, will be interrupted between Friday and the middle of next week because of interference with the Sun’s outer atmosphere, or corona.

The sharpest possible images are not expected to reach Earth until next month.

Officially known as 2014 MU69, Ultima Thule is one of the countless chunks of debris in the Kuiper Belt thought to be left over from the original cloud of gas and dust that coalesced to form the Solar System 4.6 billion years ago.

While some of the objects in the Kuiper Belt were thrown into that icy realm by gravitational interactions with planets in the distant past, Ultima Thule travels slowly around the Sun in a near-circular orbit indicating it has been in the same location for virtually the entire history of the Solar System.

As such, it is known as a “cold classical” Kuiper Belt object, or KBO. Moore said it appeared to be a textbook example of a long-theorized planet-building process.

“What we think we’re looking at is the end product of a process which probably took place in only a few hundred thousand or maybe a few million years at the very beginning of the formation of the Solar System,” he said.

That process likely began with countless small pebble-like bits of debris swirling about and bunching up in larger groupings.

“As these nodes swirl together, the processes of low-velocity collisions or in some cases gravitational interactions (cause) the rate in which things spin around in a circle to decrease,” Moore said.

“So this process would operate initially to bring a few large clumps together, maybe that’s how Ultima and Thule as separate objects formed, and then as the last few bits and pieces of their local swirl are ejected or else collide, the amount of energy that’s still left in the system is so little that the two lobes come together.” 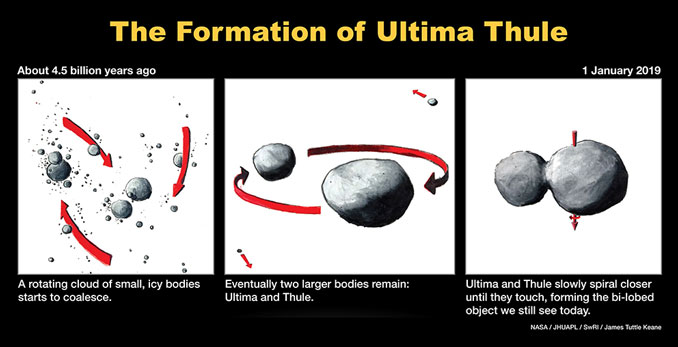 He said Ultima and Thule likely collided at a velocity of a few miles per hour at most.

“So the real bottom line is both the nearly spherical shape of the individual lobes as well as the fact that the two lobes came together so perfectly without any basically collisional damage … is a strong indication that it’s all formed through accretion as opposed to some other mechanism,” he said.

Studying a cold classical KBO like Ultima Thule is important “because they’re the building blocks of the small planets like Pluto, this new class of planets we call dwarf planets that are more populous than the Earth-like terrestrial planets and the giant planets combined,” Stern said in an earlier interview.

“It’s this third class that we have barely begun to explore, and Ultima Thule is one of these objects that we believe went into their formation.”

In addition, its radio system includes circuity enabling precise analysis of changes caused when signals from Earth pass through an atmosphere.

Data is stored on redundant eight-gigabyte solid-state recorders and sent back to Earth with a transmitter that operates on less power than a refrigerator light bulb.

Because of that low signal strength, the enormous distance between New Horizons and Earth and other demands on NASA’s Deep Space Network tracking antennas, it will take some 20 months for the spacecraft to transmit all the data collected during the Ultima Thule flyby.

Stern says flight controllers will be on the lookout for any other Kuiper Belt objects that might be found close enough to New Horizons’ trajectory to reach in the years ahead. The nuclear-powered probe is expected to remain operational throughout the 2020s and has enough on-board propellant to carry out at least one more close encounter.