The Chandra X-ray Observatory has captured intriguing images of the vast Tycho supernova remnant, first noted in 1572 when the Danish astronomer Tycho Brahe reported a bright “new” star in the constellation Cassiopeia. The new star was actually a Type 1a supernova, the sudden explosion of a white dwarf that had pulled in enough material from a companion to trigger a runaway nuclear detonation, blowing the star’s outer layers into the surrounding space. The result is an expanding cloud of gas that glows brightly in X-rays due to shock waves that heat the material to millions of degrees. 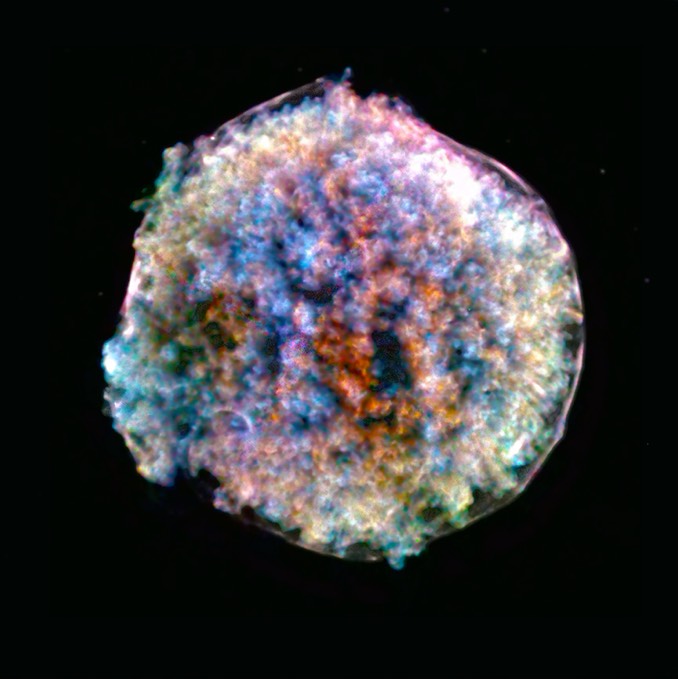 The Chandra images reveal the Tycho supernova remnant in spectacular detail, showing a pattern of bright clumps and fainter areas. That prompted astronomers to wonder whether the clumpiness was caused by the blast that destroyed the star or whether it evolved later in the remnant’s evolution. Researchers compared the Chandra images, taken in two narrow ranges of X-ray energies to emphasise the clumps and the remnant’s three-dimensional nature, with the projections of two different computer simulations. A statistical analysis indicates the clumps formed in the explosion itself, possibly because the supernova had multiple ignition points.

A new record for the most distant galaxy cluster has been set using NASA’s Chandra X-ray Observatory and other telescopes. CL J1001+0220 is located about 11.1 billion light-years from Earth. The discovery of this object pushes back the formation time of galaxy clusters — the largest structures in the universe held together by gravity — by about 700 million years.

A fast-moving pulsar appears to have punched a hole in a disc of gas around its companion star and launched a fragment of the disc outward at a speed of about 4 million miles per hour. NASA’s Chandra X-ray Observatory is tracking this cosmic clump, which appears to be picking up speed as it moves out.

A supernova remnant in the Large Magellanic Cloud displays a beautiful tapestry of wispy gas that will provide the raw material for another generation of stars.