Mighty Jupiter, the king of the planets, comes to opposition at 08:00 UT on 14 July, the moment when it lies opposite the Sun in sky at a distance of 619.4 million kilometres (384 million miles), or 4.139 astronomical units. This is the most favourable time to observe the so-called ‘superior planets’ (those apart from Mercury and Venus, which are termed ‘inferior planets’).

Jupiter, by far the Solar System’s dominant planet and the one that offers the most to observers of all levels or experience, is at its 2020 best on the nights of 13/14 and 14/15 July, when it’s a brilliant magnitude –2.8 beacon rather low in the southern sky among the stars of Sagittarius as soon as what passes for darkness as this time of the year descends. The presence of Saturn, the gorgeous ringed planet which comes to opposition itself on 20 July, lying just six to seven degrees to the east of Jupiter, adds greatly to the spectacle.

As Jupiter doesn’t achieve an altitude of 20 degrees at any time from our shores, observers living in towns and cities will have to find a good observing spot with a flat horizon from the south-east around to the south-west if they don’t want to spend the night dodging buildings and peeking between trees.

Jupiter will richly reward observers who have gone the extra mile to locate it, offering a generous-sized disc to enjoy, large enough indeed for even a humble pair of binoculars to resolve and for a small telescope to reveal its major bright zones and dark belts in its turbulent and ever-changing clouds tops.

The gas giant’s most famous individual feature is the Great Red Spot (GRS), a long-lived anticyclonic storm that has been raging in the planet’s South Tropical Zone (STrZ) for possibly 350 years. A telescope in the 150mm (six-inch) class should show the GRS at the times when it rotates into view (Astronomy Now has monthly listings of the GRS’s appearances on the Jovian disc), along with a host of other transient features, such as white and dark ovals and festoons, but have a go with a smaller-aperture telescope if that’s what’s to hand.

On the night of 13/14 July, the GRS transits Jupiter’s central meridian at about 10.35pm BST (21:35 UT), but it’s barely 10 degrees up in the south-east at this time. However, it will remain visible for a couple of hours, as Jupiter climbs towards culmination, before it rotates out of view (Jupiter completes one rotation in just under ten hours). On 14/15 July, the GRS rotates into view at about 2.30am to 3am BST.

Filters to fight the seeing

Jupiter’s low altitude from mid-northern latitudes makes observing it more problematic than normal, owing to the prevalence of turbulent seeing so close to the horizon. Atmospheric dispersion leads to noticeable colour effects, such as red and blue fringing on planets, caused by our atmosphere essentially acting as a prism. A red filter (Wratten 23/25) will help reduce dispersion fringing (though the latter filter has only 15 per cent transmission, so might be better employed with a moderate- to large-aperture telescope). An Atmospheric Dispersion Corrector (ADC) is a great accessory too.

A blue or light-blue filter (Wratten 80A/82A) will enhance the contrast between the planet’s dusky belts and bright zones, while the visibility of dark markings is enhanced by a yellow or orange filter (such as Wratten 12/21). The latter filter is an especially good choice for observing the GRS.

Jupiter is unique in the Solar System for its family of four large and bright Galilean moons: Io, Europa, Ganymede (the largest satellite in the Solar System, with a diameter of 5,268 kilometres [3,273 miles]) and Callisto. All can be seen through 10 x 50 binoculars. Following their eternal dance around their parent is a rewarding aspect of observing the giant planet, as they, together with their jet-black shadow, pass in front of the planet and at other times disappear behind and reappear from behind Jupiter (occultation) or move in and out of its massive shadow (eclipse).

The satellites move from east to west across the face of the planet and west to east behind it. After conjunction and before opposition, Jupiter’s shadow is cast to the west and shadow transits precedes transits, while eclipses happen before occultations. After opposition, the order is reversed.

Perhaps the most interesting of all the Galilean phenomena is watching the black shadows of the moons move across Jupiter’s face, though it’s much tougher to spot the moons themselves against the planet’s bright disc. A fascinating consequence of opposition is that a moon and its shadow can lie very close together, with occasionally the moon occulting its own shadow. On the night of 15/16 July, shortly after 3am BST (02:00 UT), Io and its shadow, seen very close together, will have just started a transit (see the graphic here). A 150mm telescope should be sufficient aperture to glimpse Io’s shadow in any fleeting moments of steadier seeing.

As soon as Jupiter is observable on the night of 13/14 July, a pair of binoculars will show only three Galilean moons; Io and Europa lie roughly equidistant from the planet, to the east and west (left and right, through binoculars), respectively, while Callisto lies some way west of Jupiter. Ganymede is hidden behind the giant planet, after disappearing into Jupiter’s shadow at 9.36pm BST (20.36 UT). It’s a shame that this event is not observable from UK shores, but Jupiter is barely above the horizon, having not long risen.

At this close to opposition (which occurs about 12 hours later), Jupiter’s giant shadow falls almost directly behind the planet, leaving an extremely thin sliver of shadow hugging the planet’s western (preceding) limb, which Ganymede gradually disappears into. See the graphic here showing the positions of the moons when Ganymede reappears at Jupiter’s eastern limb at around 1am. Obviously, the majority of eclipse events throughout the year occur when Jupiter is some way from opposition, so a moon will be seen to disappear in eclipse when it lies well away from Jupiter’s limb. Jupiter’s shadow falls increasing further westwards (or eastwards after opposition) from the limb the further the planet is from opposition.

On the following night, 14/15 July, all the moons will be visible for the entire night. There’s no end to the observational fun that can be had following Jupiter’s Galilean satellites. Astronomy Now has monthly listings of those Galilean moon events that are visible from UK shores.

Despite Jupiter’s less-than-ideal observing circumstances at this year’s opposition, there’s still so much that can be seen by a determined observer. However, Jupiter is still a beautiful sight if all you want to do is gaze at it out of your window.

Our July issue features a complete guide to what’s up in the night sky this month including how to observe Jupiter. Get your copy in the shops or order online for home delivery in print or digital download. 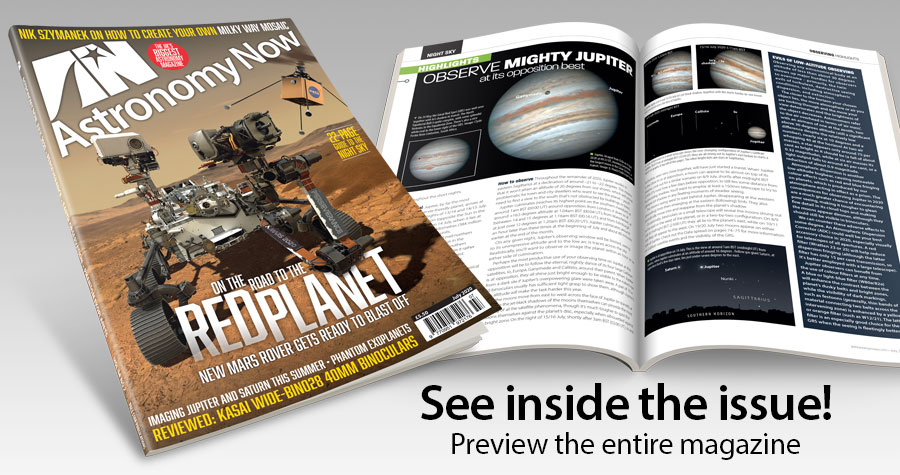 See all five naked-eye planets gathered in the morning sky

All five of the bright naked-eye planets are observable in the pre-dawn sky from about the third week of January 2016, particularly if one lives south of the equator. But even from the UK, you can get to view the spectacle if you time it right — and the weather obliges! The last time that Mercury, Venus, Mars, Jupiter and Saturn appeared in the same sky was 11 years ago.

Despite more than seven weeks having passed since opposition, the Solar System’s largest planet Jupiter is still big and bright in the UK evening sky of May, highest in the south around 10pm BST. Find out about the phenomena of Jupiter and its moons that you can see from the British Isles for the remainder of the month, starting with a transit of Jupiter’s Great Red Spot on 19 May.

In yet another Great Red Spot surprise, researchers find winds in the huge storm’s outer reaches have sped up over the past decade.