This colour-enhanced image was taken at 1720 GMT on 12 February 2019, as the spacecraft performed its 18th close flyby of the gas giant planet. At the time, Juno was about 13,000 kilometres (8,000 miles) from the planet’s cloud tops, above a latitude of approximately 55 degrees north.

Citizen scientist Kevin M. Gill created this image using data from the spacecraft’s JunoCam imager. The image has been rotated approximately 100 degrees to the right. 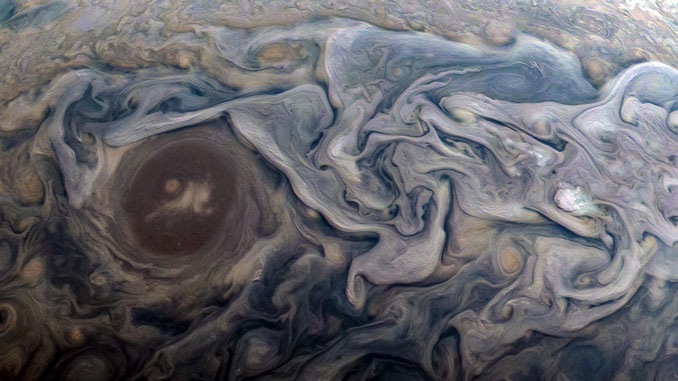 See the Moon and Jupiter get close on 7 May

Observers with a clear sky to the south as darkness falls on Sunday 7 May can see the 12-day-old waxing gibbous Moon and planet Jupiter separated by little more than twice the width of a full Moon. For telescope owners in the UK, this is a night where you can also see Jupiter’s Great Red Spot and the planet’s four large Galilean moons.

Scientists on NASA’s Juno mission have observed massive amounts of energy swirling over Jupiter’s polar regions that contribute to the giant planet’s powerful aurora – only not in ways the researchers expected.

Early risers in the UK with an unobstructed horizon from southeast through south can see the old crescent Moon close to dazzling Venus in Libra then Jupiter in Ophiuchus over three consecutive mornings starting New Year’s Day around 7am GMT. The brightest and largest planets lie little more than the span of an outstretched hand at arm’s length apart at this time.