There’s a partial eclipse of the Moon on 18/19 November (Thursday to Friday) which is a favourable event for observers in North America. Lasting for 208.4 minutes (the deeper, umbral part of the eclipse) it is the longest since 1440 and will not be superseded until 2669, according to Fred Espanek (‘Mr Eclipse’), a retired American astrophysicist who worked at NASA’s Goddard Space Flight Center and provided the space agency with eclipse bulletins from 1978 to 2009.

The eclipse is virtually total, as 97.4 per cent of the Moon will be immersed within the Earth’s umbral shadow, the central and deepest part of Earth’s shadow, at maximum umbral eclipse. As well as being able to secure some pretty pictures of a coppery, or rusty-brown Moon when it’s close to maximum eclipse, our satellite lies just under six degrees below the magnificent Pleiades open star cluster (Messier 45) in Taurus; I’m sure astro-imagers will have fun with this conjunction.

Unfortunately, the Moon is very poorly placed across the UK, with the Moon setting or lying very low down just as the umbral eclipse begins. The North American continent is the place to be, where the umbral potion of the eclipse can be witnessed in its entirety. Parts of Australia and New Zealand and most of Asia can enjoy some of the spectacle too.

How does an eclipse of the Moon happen?

An eclipse of the Moon occurs at full Moon, when the Earth lies between the Sun and the Moon and our satellite enters the shadow cast by Earth. The eclipse will be total, or partial according to how central the Moon’s passage through the eclipse is. Owing to the tilt, or inclination of the Moon’s orbit in relation to the ecliptic, the Sun’s apparent path across the sky and a zone which most bodies in the Solar System keep close to, there’s about three occasions when the Sun, Earth and Moon precisely line-up in every two years, on average.

The eclipse begins at 06:02 UT on 19 November with the penumbral phase, with the Moon’s first contact with Earth’s outer and lighter penumbral shadow. The umbral eclipse starts at 07:18 UT, when the curved shadow of the Earth’s edge intrudes at the Moon’s north-western (upper left with north up) limb. As the Moon presses on into the umbra, this shadow proceeds to move across the western lunar hemisphere.

Greatest eclipse occurs at 09:04 UT, when just 2.6 per cent of the Moon remains outside the umbra (seen as a thin slither of light at the Moon’s southern limb). The umbral eclipse ends at 10:47 UT and the eclipse as a whole at 12:05 UT, with last contact of the penumbral shadow at the Moon’s eastern limb.

A poor showing from UK shores

The Moon is setting across the UK just as the exciting, umbral phase of the eclipse is beginning. Given a transparent sky, it may be possible to see some of the very subtle penumbral phase from the start shortly after 6am GMT on Friday, 19 November, though given that the Moon lies between just 10 to 14 or so degrees up from London and Edinburgh, respectively, and astronomical twilight has begun, this is bit of a forlorn hope.

From Edinburgh, the Moon is barely four degrees up at the start of the umbral phase and is setting in London. 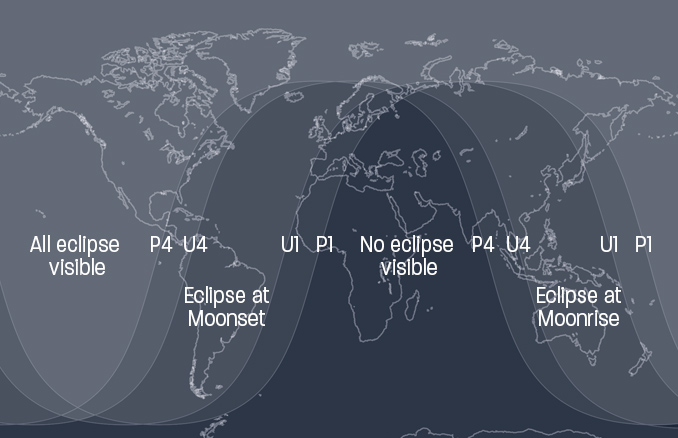 North America is that only continent where the umbral eclipse can be seen in its entirety, and west is best. From New York, the eclipse begins at about 1am EST on Friday, 19 November with the subtle penumbral stage. The Moon rides high with an altitude of 50 degrees by the beginning of the umbral phase at about 2.14am EST, though by 5.47am EST, the end of the umbral phase, it lies just 11 degrees above the west-north-west horizon.

Over on the west coast, from Los Angeles the whole of the eclipse, including the penumbral phases at the beginning (~10pm PST on Thursday 18 November) and the end of the eclipse (~4.02am on Friday, 19 November) can be enjoyed. The Moon lies high overhead throughout the duration of the umbral eclipse.

Soon after the start of the eclipse, you’ll easily notice with the naked eye the curved edge of Earth’s shadow encroaching on the Moon. Simple optical aid, such as a pair of binoculars and a small telescope will of course enhance the view and allow you to more easily see the precise moment of first and last contact of the umbral phase of the eclipse.

As the Moon glides further into Earth’s deep shadow it should become more colourful, hopefully turning a deep shade of orange. The darkness and variety of colours within the umbral shadow vary from eclipse to eclipse, depending on the state of those parts of Earth’s atmosphere responsible for refracting sunlight into the umbra. Add on local effects, such as light pollution and sky transparency, and it’s impossible to predict how colourful the Moon will be.

Observers in New Zealand’s North Island can get a fair crack at observing part of the umbral eclipse. From Auckland, the Moon rise at about 8pm NZDT on Friday 19 November in Earth’s penumbral shadow. At the time of greatest eclipse, at about 10pm NZDT, the Moon has climbed to just short of 20 degrees in elevation. The rest of the eclipse, including the closing penumbral phase (ending at about 1.05am NZDT on Saturday, 20 November), can be enjoyed.

From Christchurch on the South Island, the Moon lies around 13 degrees up in the sky at greatest eclipse, with the penumbral phase ending shortly before midnight NZDT.

Across the Tasman Sea, eastern Australia fares best. From Sydney, New South Wales, the Moon rises at 7.34pm AEDT on Friday 19 November fully immersed in Earth’s umbral shadow. Only the later half of the umbral eclipse and the closing penumbral phase are really viewable owing to the low altitude of the Moon. Further west, in Adelaide, South Australia, around only the last 20 minutes or so of the umbral phase can be observed. Unfortunately, the most westerly parts of Australia, including Perth, miss out completely on the umbral eclipse.